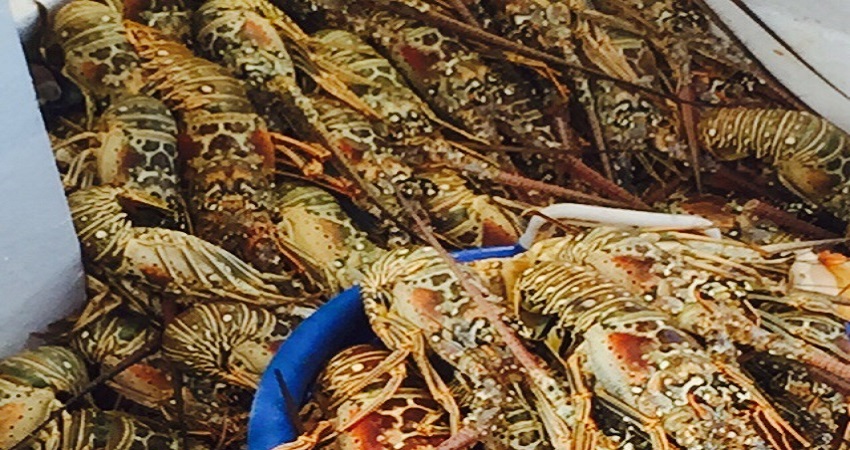 #TurksandCaicos, August 23, 2017 – Providenciales – Lobster season 2017/2018 kicked off on Tuesday 15th August, with opening catch landed at processing plants in South Caicos and Providenciales totaling 32,262 pounds (lbs.), which is a 25% drop in landings recorded for the first day of the open season in 2016.

“The first day while important, is not necessarily an indication of the overall health of the fishery, nor does it accurately forecast the coming fishing season.   The past three years have seen a decline in the opening day landings, however the total catch per unit of effort for the season has increased.  There are management measures in place to support the recovery of the lobster fishery stock and DECR will continue to monitor the landings throughout this year to inform further fact based management decisions, where required by DECR ” said Mr. Ethan Griesbach, Acting Director of the Department of Environment & Coastal Resources (DECR).

DECR Officers have been inspecting catch as fishermen come into the plant and while at sea, and boat patrols have been conducted to deter illegal activities. However, the DECR fleet has been on stand-by to assist rescuing fishermen when needed.

Minister Ralph Higgs commented, “I would like to express my appreciation to the staff and management at Department of Environment and Coastal Resources for efforts made to ensure maximum compliance and minimal infractions during the opening of the 2017/18 lobster season.   I would also like to thank the fisher folk that came out in numbers, all of whom displayed complete respect for the law and officers.   The fishing industry is a very important traditional sector which the government is committed to working along with all stakeholders to ensure future sustainability of the industry”

Restrictions relating to crawfish, as per the Fisheries Protection Ordinance, are listed below:

o   When whole,  a length of 3.25 inches measured from the front of the groove between the horns directly above the eyes, along the middle of the back to the rear edge of the back shell; or

o   When the tail has been separated, a tail weight of 5 ounces whether processed or not;

The DECR appeals to citizens, residents and visitors in the Turks & Caicos Islands, to familiarize themselves with and to uphold the Fisheries Regulations, and urges all responsible citizens to call DECR at 338 4170 or email environment@gov.tc to report any violations.