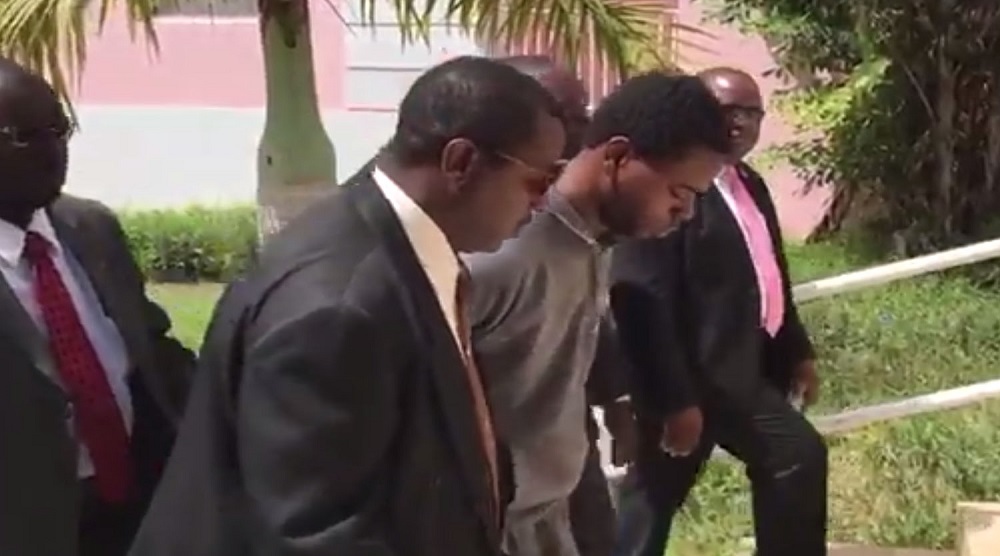 #Bahamas, August 30, 2017 – Nassau – The so called ‘baby killer’ was crying when he left the court house today after being slammed with three charges of serious crimes; two attempted murders and a murder and the person killed was just eight months old.    Just barely an adult himself, 19 year old #AnthonStevens was shackled as he was led into the courthouse today in Nassau to be formally arraigned in a most heinous crime; the killing of an 8 month old baby boy which happened in the wee hours of Monday.

Stevens was seen crying as he exited the courtroom and was piled into vehicle once he was formally charged with baby Shelton Tinker’s murder and the attempted murder of his parents: father Shelton Tinker Sr and mother, Jeffrina Sweeting.   Stevens on Monday turned himself into Police with an attorney after a nationwide manhunt was launched for him as a suspect.

It was said the young man, also known as #Bigga, was known to the father and that Stevens forced Shelton Tinker, at gunpoint into his Rupert Dean Lane residence and opened fire shooting Tinker, a woman – eventually identified as the mother of the baby and the infant.    The adults were seriously wounded and the baby, identified on Tuesday as Shelton Delano Tinker was killed on the spot.

Already Anthon Anthony Davis Stevens is labeled a ‘baby killer’.    The horrific and unbelievable murder of the infant rocked the House of Assembly too, and it was reported that Prime Minister Hubert Minnis on Monday met with the Attorney General and the Royal Bahamas Police Force for an update on approaches to abating crime and to show Police his support explained Press Secretary, Anthony Newbold.

Newbold also defended the administration and detractors who say crime is still way out of hand, with “… the country must understand there is no one solution to crime.   He said a complex approach must be taken to arrest this multifaceted problem.”

Stevens was bound at the back with handcuffs and shackled at the ankle as he entered the court, firm faced, sometimes head down and even crying for a killing which has outraged the nation.