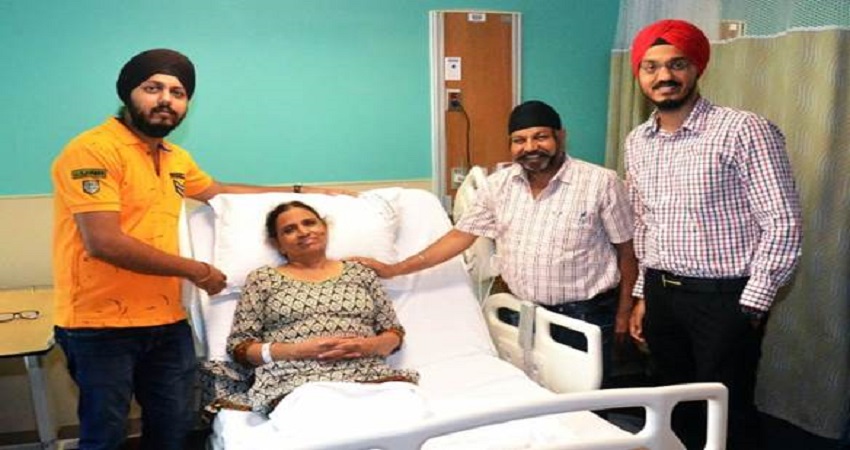 Cayman Islands, August 28, 2017 – A family vacation in a tropical paradise turned into a life or death situation for Surjeet Kaur when an unexpected viral infection became a critical health emergency.

A stomach virus resulted in myocarditis for Kaur, who was visiting her son in the Cayman Islands from India.   Myocarditis is an inflammation of the heart muscle caused by various infections or drug toxicity.   In severe cases this can lead to heart failure and death.

Kaur was ill for five days with the viral illness, and initially on admission to a local primary care hospital her organs were showing good functionality.   However, her condition deteriorated significantly and quickly less than 24 hours later.

Her son, Simranjit Singh, who lives and works in the Cayman Islands, received a call from the hospital at 2 a.m. saying his mother was in critical condition.

Rushed by ambulance to Health City Cayman Islands, Mrs. Kaur was placed on ECMO life support, which allowed her heart to heal so she could recover.

By this time her blood pressure was dangerously low and other organs, especially her kidney and liver, started showing signs of failure.   Her failing heart would not have sustained her without life support.

The ECMO procedure involves channeling the patient’s blood into a roller pump that serves as the patient’s “heart” throughout treatment.   The ECMO machine is connected to a patient through plastic tubes (cannula) placed in large veins and arteries in the legs, neck or chest.   The pump sends blood through an oxygenator, which serves as an artificial lung, infusing the blood with oxygen and removing carbon dioxide and returning it to the patient.   During ECMO treatment, the patient’s heart continues to beat, but its work is made easier because the ECMO machine does much of the pumping.

Dr. Binoy Chattuparambil, Chief Cardiac Surgeon and Director of the ECMO program at Health City, explained the need for this procedure in Mrs. Kaur’s situation:  “We chose ECMO as it is less complicated and quick to institute.   With informed consent from her husband and family, ECMO was instituted through a vein in the groin.   She required very intense monitoring and treatment in the ICU for next few days, but the heart slowly and steadily showed signs of improvement and she was taken off ECMO.   An echocardiogram showed that the heart had recovered completely without any signs of damage. She went home with a strong and healthy heart and functional organs.”

During extracorporeal membrane oxygenation, the patient is the focus of a highly coordinated medical team and receives round-the-clock care while on the “heart lung machine”.    The length of time a patient remains on therapy depends on the diagnosis and the patient’s individual response.

An ECMO machine can help save a patient’s life, but it does not treat the patient’s disease or injury.   The machine simply provides support for a patient while the health care team works on treating the underlying disease or injury (such as an infection) or until organs for transplant become available.

Singh reported with great relief that his mother responded well to ECMO treatment.

“The treatment was successful. After 48 to 60 hours, she was out of danger … we were very thankful that she survived the treatment,” he said.

Dr. Chattuparambil noted that ECMO treatment is a team process and requires an experienced team of doctors and medical professionals.

“Health City Cayman Islands has a very strong, expert and experienced team of doctors, perfusion scientists and nurses who have managed many patients on ECMO and saved their lives.   The hospital has two ECMO machines, one of them is the most advanced design called CARDIOHELP which, being very small and compact, can be used to transport patients via road or by air,” he explained.

Dr. Binoy, as he is called, made note of the exceptional ECMO outcomes at Health City.

“During the last two and half years we have treated eight critically ill patients with ECMO, both children and adults.   With a survival rate of 90 per cent, our positive results are far better than the global average published by the ELSO (Extracorporeal Life Support Organization) registry, located in the United States,” he said.

Kaur’s family had words of thanks and praise for the entire Health City Team following her treatment.

Singh said: “We as a family want to thank Health City and all of the doctors here.   Along with the doctors, we want to thank the finance and admin team, as well as the hospitality staff.   They have been tremendous this last two weeks.   They have given us all the support we required. We have been away from our family back home, and they have come forward to be our family and treated us as a family member.   I have never seen such compassion and hospitality anywhere in the world as I have seen at Health City, so from the bottom of our hearts we wanted to thank Health City and all the staff for cooperating with us and giving us support at the time that we needed it.”