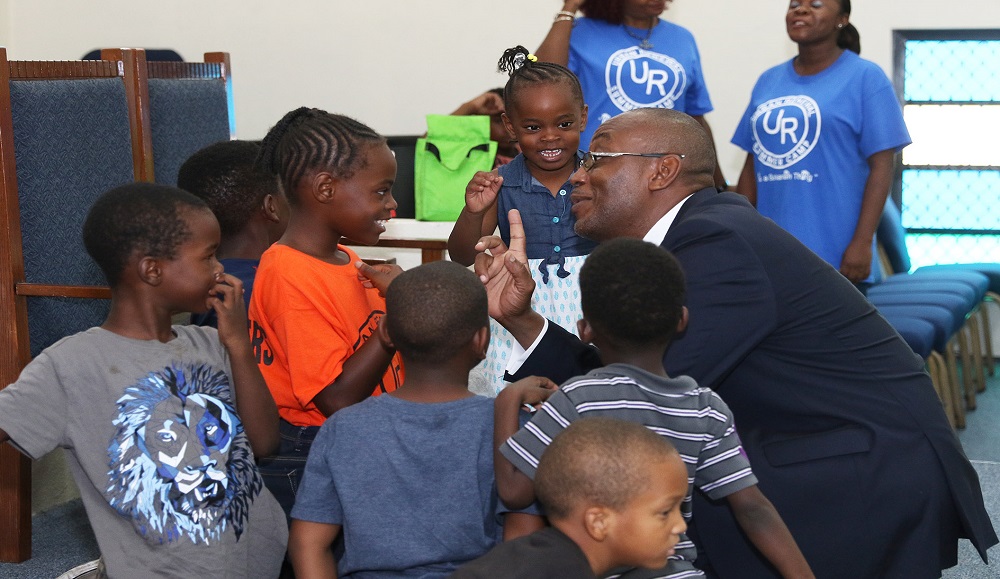 Bahamas, July 22, 2017 – Nassau – Some 100 plus children are enrolled in Fort Charlotte’s Urban Renewal Summer Camp and although now into week two, the numbers continue to swell.

Led by a team of 11 leaders, the children take time out of their 4-hour day to focus on the Urban Renewal Summer Camp theme “It’s a Bahamian Thing”.

“During the downtime we try to hone in on Bahamian culture to make the kids more aware of our culture and the meaning of what it is. We are starting from young so we can mold them into their culture so they can understand who they are and build national Bahamian pride. Not knowing their heritage is like a tree with no root,” said Christina Sweeting, coordinator for the Camp.

Ms. Sweeting indicated that the children take a daily walk through the Bahamian islands in the classrooms at Greater Chippingham Church of God. Billboards erected in the classrooms are fully decorated with Bahamian crafts depicting national heroes, Bahamian artwork and more. This allows them to make the journey around The Bahamas. 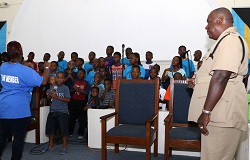 The children also participate in devotions, make crafts and are instructed in subjects including sports, English Language and History. Pep talks on bullying, nutrition and dos and don’ts about summer are presented. Weekly field trips, T-shirts and fully balanced meals are also provided for the children.

They were busy rehearsing a musical selection for the Closing ceremony when the team from BIS stopped by on Thursday.

“Every Camp is expected to give a presentation at the Closing Ceremony. Our contribution is the choir,” said Ms. Sweeting. “We are trying to build a Fort Charlotte Community Choir so we are beginning with the kids who come to the Camp.”

Superintendent Dencil Barr said as a result of the formation of the choir, the children are able to show they have developed synergy from what they have been exposed to in such a short time.

Visitors including the Hon. Mark Humes, Member of Parliament for Fort Charlotte, and representatives of Baha Juice and Beverages also visited the happy campers on Thursday.

Baha Juice donated several cases of fresh, natural, organic juice to the camp. Director Levin Wilson said his company was “excited” about giving the product to the children.

On the other hand, Mr. Humes plans to direct the campers in a few songs.

The children who range in age from 5 to 15 represent neighborhoods including Fort Charlotte. According to Superintendent Barr, many of them were enrolled as a result of recruitment exercises undertaken by his staff members. “We did walkabouts throughout the neighborhoods and urged parents to enroll. The parents know of the positivity of Urban Renewal. That is why we have such a great response.”

PHOTO CAPTIONS: The Hon. Mark Humes interacts with the campers and Superintendent Dencil Barr watches as the children perform.