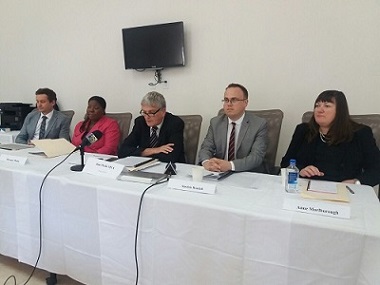 Turks and Caicos, July 24, 2017 – Providenciales – New electoral district boundary cuts, a more clear way to deal with candidates who have dual citizenship, introduce laws to encourage the disabled the right and ability to vote and find a way to expand how many people are actually voting were among the recommendations by the Election Observer Mission to the Turks and Caicos Islands.

The final report on the General Elections of the TCI is complete and it revealed what the Election Observer Mission found between December 8-18, during the country’s last election period.    While the mission group found that the voting and counting process was good or very good and that voting was orderly and transparent and well organized, there were inconsistencies in the layout of polling stations, how Presiding officers checked their initials on the ballot and despite more polling sites, there were still long lines.

The Observers did not believe this affected the integrity of the vote, but certainly the efficiency of the process.    Among the recommendations was a thorough review of the Elections Ordinance and a more expedient counting system, especially when it comes to the all island ballots.

There were 11 listed recommendations in all, which included “either ending the practice of marking voters’ fingers with ink, or to elaborate detailed procedures on application and checking before the issuing of a ballot paper.”   And the six person group, led then by Jim Wells MLA of Northern Ireland believes that to display the results of the election outside of each polling station would increase transparency and confidence in the outcome of elections.