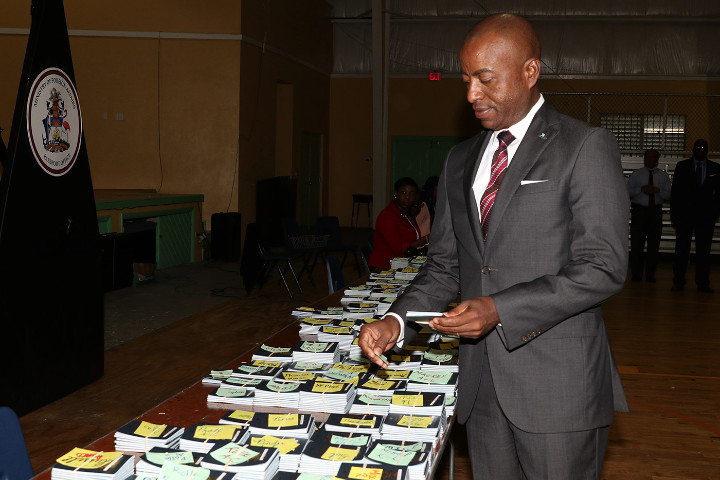 Bahamas, July 24, 2017 – Nassau – A Passport Issuance Centre has been set up on the campus of the Anatol Rodgers Junior High School on Faith Avenue off Carmichael Road. During a tour of the facilities on Thursday, July 20, Minister of Foreign Affairs, the Hon. Darren Henfield urged Bahamians to make use of the service.

“You might be aware that February 2016 was the International Deadline for all Hand-Written Passports,” said Minister Henfield: “This created a rush at Passport Offices throughout the Commonwealth for all persons still not in possession of the Electronic Passports, since the inception of the Government’s e-passport system December 2007.

He said that this ‘urgency’ coupled with the normal last minute summer rush, prompted the birth of the Anatol Rodgers Passport Issuance Project.

He said that during the months of July and August 2016, three thousand six hundred and sixty-four e-passports were successfully issued to the Bahamian Populace. He said that this year, a decision was made to provide an alternative site for the collection of passports.

“Similarly, during the year 2017, it was discovered that in spite of every effort by Passport Staff to prompt recent e-passport applicants to retrieve their documents from our Thompson Boulevard/University Boulevard Location, over 3,269 e-passports remained at Passport Office awaiting collection by members of the Public,” said the Minister. He said bearing that in mind, the Government decided to once again initiate the Anatol Rodger’s Gymnasium Issuance Centre on 3rd July 2017 for the sole purpose of issuing New E-Passports.