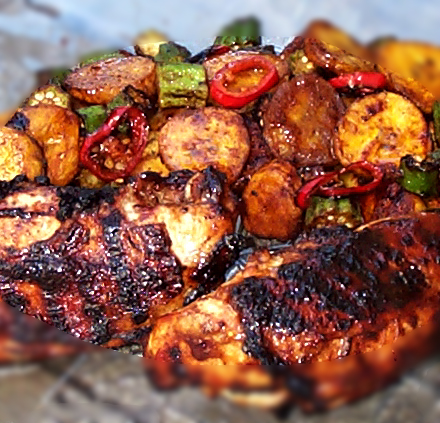 MONTEGO BAY, Jamaica, July 11th 2017: Jamaica is well poised to benefit from the global food-tourism market. The comment was made by Culture, Gender, Entertainment and Sport Minister, Hon. Olivia Grange, who was addressing the official launch of the ‘MoBay Jerk Festival’ at the Royal Decameron Resort in St. James. She says food tourism could complement the already well-established elements of the tourist experience, including entertainment.

Pointing to research done in 2004, which stated that more than one-third of tourist spending is devoted to food, she noted that the demand for culinary treats has been growing steadily worldwide, and Jamaica’s entry into that market would be a natural one. She says Jamaica has a duty to protect the jerk tradition, “much like reggae music, we have a duty to ensure that we protect and promote authentic Jamaican jerk. Grange quoted the World Tourism Organisation statement which marks a growth in food tourism in recent years, as more people are travelling to a destination to experience the food. 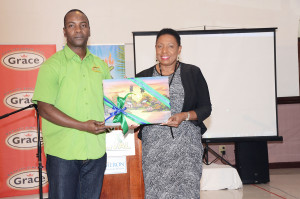 Photo by: Janet Silvera
Caption: John Lindo, chairman, MoBay Jerk Festival presents Minister Olivia ‘Babsy’ Grange with the gift of a Jamaican painting during the launch of the event.

Culinary activities, such as the Montego Bay Jerk Festival, give us an opportunity to market and present Jamaica as the home of authentic jerk food,”

This year the organisers of the jerk festival, are marketing the event as a major Emancipation/Independence activity as it marks ‘Jamaica 55’. The 2017 staging of the MoBay Jerk Festival takes place at the Catherine Hall Entertainment Centre on August 1st.