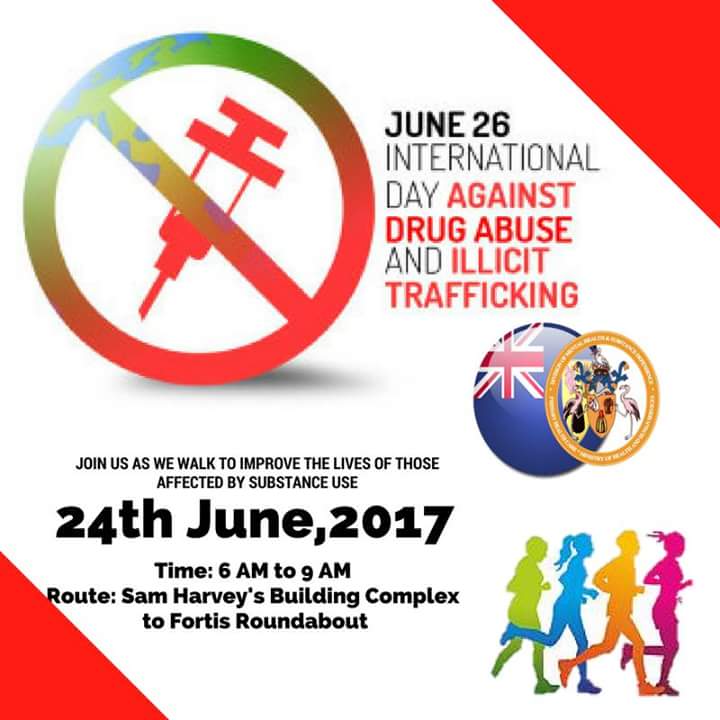 Turks and Caicos, June 21, 2017 – Providenciales –  June 26th, 2017 marks International Day against Drugs & Illicit Trafficking around the world. It was first implemented by the United Nations on 7th December, 1987, as a reactive measure to the world’ drug crisis.

The Department of Mental Health & Substance Dependence while ecstatic of advancements made in recent years such as an increase in manpower resulting in an influx of persons seeking and receiving treatment, implementation of the Tobacco Control Ordinance and the ground breaking of the long awaited Drug Rehabilitation Halfway house, still realizes the global drug and illicit drug trafficking epidemic which has unfortunately invaded our shores.

Statistics stemming from the Royal Turks & Caicos Islands Police Force drug reports from 2014 to 2015 indicate that seizures of illicit substances namely cocaine and marijuana were a normal monthly occurrence; this finding corroborates with the Mental Health & Substance Dependence Department’s annual reports during the same period which indicated an high number of persons between the ages of 15-25 seeking treatment for cocaine and cannabis addiction.

It is important to note that an increase in substance use and distribution negatively impacts a population and its economy’s sustainable development. It is for this reason that we are urging a multifaceted approach to this issue based on the premise set during the United Nation’s General Assembly Special Session on Drugs (UNGASS) which took place in April of 2016. It’s main recommendations were to ‘explore alternative measures to conviction/punishment, where appropriate, promoting international cooperation, chasing down the financial proceeds of drug related crime – focusing on drug prevention and treatment – and upholding fundamental human rights’.

It is for this reason that we have moved past mere policy creation to taking actions. For this we are requesting public assistance by joining us on Saturday June 24th, 2017 for a collaborative government and community initiative against this common demon. We are asking that person not only come out and walk but visit our booth and speak with our staff so that they are informed on how they can make a difference.

The activities set to occur are;

For more information on International Day against Drugs & Illicit Trafficking, or for assistance contact the Department of Mental Health & Substance Dependence, on the following numbers;