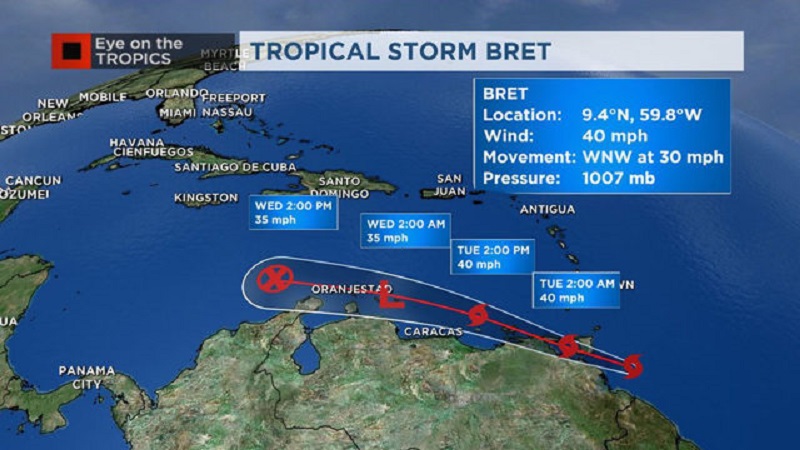 Trinidad & Tobago, June 19, 2017 –  Trinidad and Tobago’s Government is advising calm in the face of now Tropical Storm Bret as the country is the first to receive a storm watch warning for the 2017 Hurricane season.

The T&T Meteorological Services anticipated the twin island state to start experiencing stormy conditions earlier than it previously forecast, with heavy rains starting from as early as  8 p.m. as it expects the cyclone to become fully organised as the day progresses.

During a press conference today, Government said public schools would be closed, government offices would be closed and there is warning of rough seas, waves up to nine feet.   Over thirty flights by Trinidad based Caribbean Airlines were cancelled.

The Office of Disaster Preparedness Management, ODPM, has given the shelters and are urging residents to get to know where the nearest shelters are located.

At the time of this report, T&T was already experiencing black outs ahead of Tropical Storm Bret which is also forced a Tropical Storm watch for the ABC islands of Aruba, Bonaire and Curacao.

Tropical Storms and Hurricanes are a rare occurrence for the island nation.