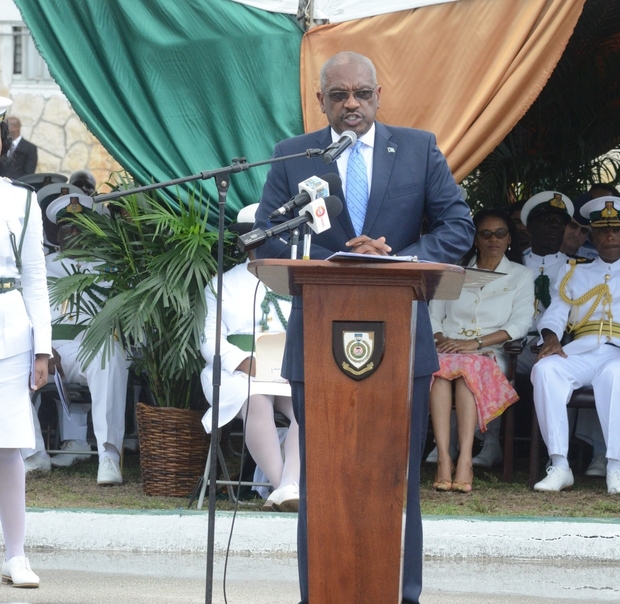 The Government of The Bahamas will undertake a number of initiatives in order to further support the decentralization, transformation, mobilization and regeneration of the Royal Bahamas Defence Force.

These include the completion of the Sandy Bottom Project with the construction of proposed warehouses, workshops, administrative buildings, and accommodations for bases in Coral Harbour, Inagua and Ragged Island.

Prime Minister, Dr. the Hon. Hubert Alexander Minnis said the government will also be looking forward to the development of bases in other islands as part of this programme.

The Prime Minister further announced that the Government will make provision for the extension of contractual terms for qualified and performance-oriented senior enlisted personnel who are required, by law, to retire at age 55.

The Sandy Bottom Project is a $232 million investment by the Government of The Bahamas to upgrade the Defence Force’s fleet and Operations that will ultimately lead to the decentralization of base operations to ensure faster response times.

It includes the acquisition of nine patrol craft, the dredging of Harbours and construction of quay walls and jetties at HMBS Coral Harbour Base, Matthew Town, Inagua and Gun Point, Ragged Island, that will result in modernization of port facilities. The Project also calls for the upgrade and expansion of Coral Harbour Base and the Base at Matthew Town including construction of warehouses, workshops and an Operations Building. A new Base and Aircraft Hangar will also be constructed at Gun Point, Ragged Island.)

Prime Minister Minnis said the Government will strengthen security cooperation with regional partners such as the United States of America which – through its U.S. Northern Command – has been responsible for conducting military training for hundreds of Defence Force Officers and Marines as well as providing financial assistance with patrol craft and equipment.

“To this end, and in further support of the Defence Force’s decentralization, transformation, mobilization and regeneration programmes,” Prime Minister Minnis said: “My Government will [also] conduct a review of salary, responsibility allowances and technical pay to ensure that Officers and Marines are adequately paid for their hard work.

“The future is bright for the fine men and women of the Defence Force who are called upon to set a high standard of excellence and to help guard our heritage. I thank the Officers, Warrant Officers, Non-Commissioned Officers and Marines of the Royal Bahamas Defence Force for their dedicated service. I assure you of the Government’s support of your fine and noble duties,” Prime Minister Minnis added.