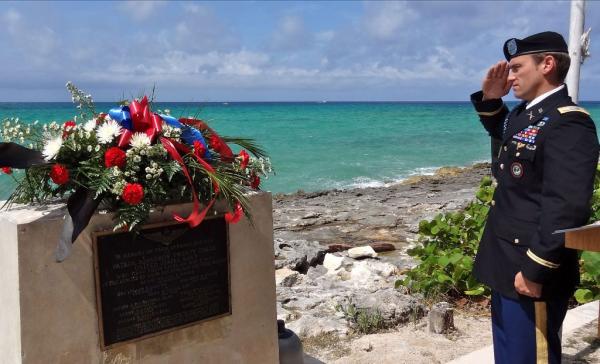 Bahamas, May 22, 2017 – Nassau – On Monday, May 29th, the United States Embassy will commemorate Memorial Day with a wreath laying ceremony at Clifton Pier in memory of fallen comrades and military veterans. Special recognition will be given to U.S. Patrol Squadron 23 Sailors, who died off the coast of Nassau on May 7, 1954 and Bahamian Private First Class Norman Darling who died in the Iraq War in 2004. Sergeant Errol McKinney, U.S. Army, a Bahamian killed in a motorcycle accident in 2013 shortly after to returning to Ft. Bliss, Texas following a deployment to Afghanistan will also be remembered.

The ceremony will include representatives from the U.S. Embassy to The Bahamas, our Bahamian counterparts in law enforcement and other government officials. It will be held at the site of the Memorial.
The Clifton Memorial site is located about 150 meters east of Commonwealth Brewery on South West Bay Road.

On September 4, 1954 the Clifton Pier monument was erected in honor of the lost Sailors of MA-5. The U.S. Office of Defense Cooperation observes annual Memorial Day celebrations in coordination with The U.S. Embassy and The Commonwealth of The Bahamas in remembrance of this event.