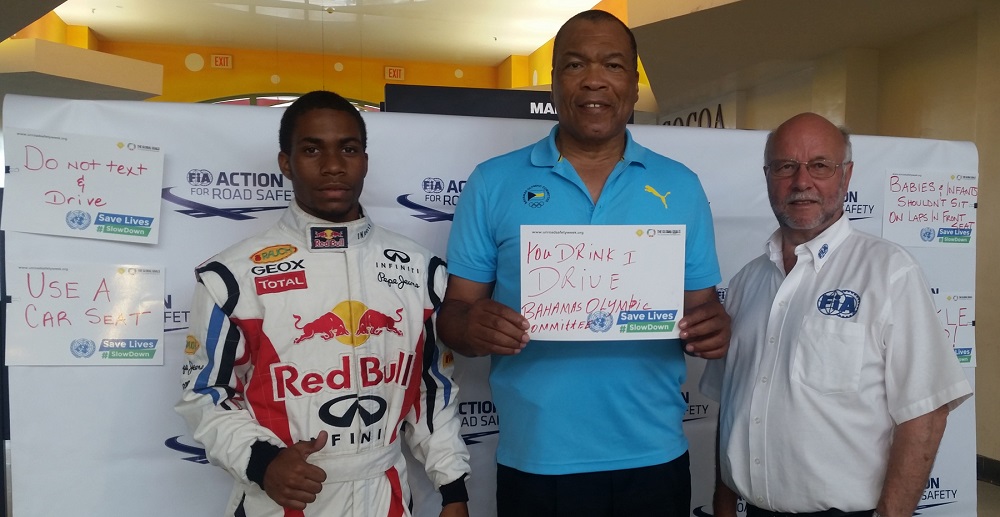 Bahamas, May 19, 2017 – Nassau – They held up signs with lines like “Race Drivers Say Don’t Race” and “You Drink, I Drive.” They were the recruits joining the movement to reduce the number of road deaths and they took the pledge at the Mall at Marathon Saturday during the United Nations Road Safety Week May 8-14.

This is the fourth year the United Nations program has aimed at slashing the startling statistics that include the road crash death of a child somewhere in the world every 30 seconds. However it is the first year The Bahamas has participated, thanks to funding from the FIA, the World Governing Body of motor sport, and the presence and organization of FIA Bahamas Development Director David McLaughlin.

“Speed is still the number one cause of road deaths but there is increasing alarm at the number of accidents caused by distracted driving,” McLaughlin said. “In 2016, for the first time in three decades, the number of fatal accidents in the U.S. increased after all those years of declining and the main reason was distracted drivers, people texting, posting, checking e-mail or Facebook or otherwise paying more attention to their phone than to the road.

All it takes is a split second of being diverted, taking your eyes off what’s ahead and you could end your life or someone else’s. At only thirty miles per hour your car covers forty-four feet every second so a momentary glance down at your phone can cost a life. That’s why awareness campaigns like this are so important. It is about saving lives. And when you hear some of the lines in the campaign they really make you sit up and take notice, lines like ‘My car is made of metal, pedestrians and children are not.’ That’s a powerful message.”

The UN goal is ambitious – to save five million lives by the year 2020.

Bahamas Olympic Committee President Wellington Miller was on hand for the pledge event at the Mall at Marathon.

“This is so important,” he said, moved by a video that showed the brutal impact of speed and carelessness wiping out one innocent life after another. Miller was also aware of the value of the EduKarting program that takes place in week-long sessions at two schools in Nassau and teaches youngsters discipline, skills and responsibility while allowing them the opportunity to get behind the wheel of a kart and participate in team and individual racing. “I am proud to be part of this,” Miller added as he signed his message ‘You drink, I drive.’

The weekend event also marked the launch of signing up for EduKarting Summer Camp  and applications are available on the EduKarting Facebook page.

Curt Thompson, who spent three years with the program, first as student, later as assistant, said it had a “huge impact” on his life. Thompson is now a pilot with Dove Wings Charter.  In addition this week marks the FIA Celebration of Volunteers in Motor Sport and along with Curt the Mall activity was organized by EduKarting ‘Graduates’ Megen and Mya Curry, Samuel Johnson and Breanna Major.