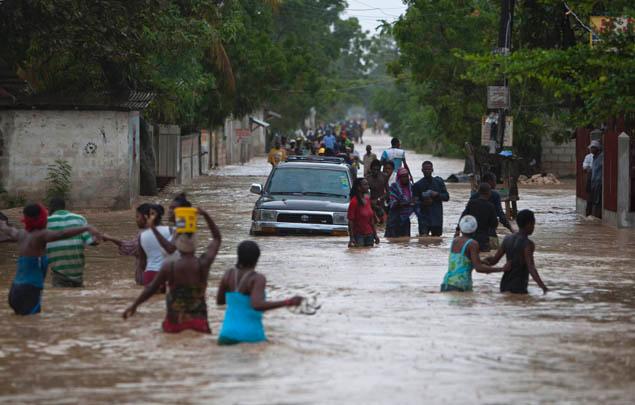 Two young children were among the fatalities, which all occurred in northern Haiti, while the people missing at sea were caught in rough weather off the southwestern coast, said ministry spokesman Guillaume Albert Moleon.
“Unfortunately, we must deplore the deaths of people who did not follow the safety instructions and tried to cross flooded streams,” he said of the deaths on land.
In southern Haiti, the soil is “100 per cent saturated with water,” Moleon said, warning of a high risk of landslides.
Work is underway to clear debris from flooded roads, while the search continues for the missing fishermen and maritime officials renewed a safety warning for those venturing to sea.
As the hurricane season approaches authorities are concerned about conditions in areas that have not recovered since powerful Hurricane Matthew struck in October.
Haitian towns have been popping up with little urban planning, leaving many prone to flooding even during a moderate storm.
Lacking infrastructure, remote rural areas in the Haitian mountains are also periodically isolated from the rest of the country due to washed-out roads and swollen rivers.