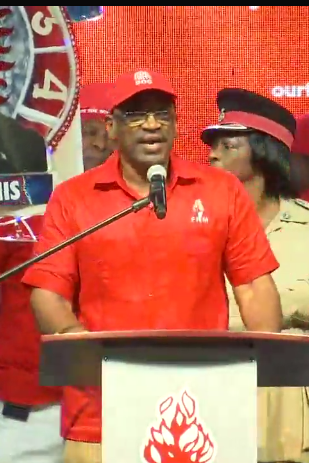 Bahamas, May 4th 2017, Nassau: A Tax Free zone, free of business licenses and property tax will be implemented in the inner city if elected. The promise from FNM leader Dr.Hubert Minnis, as he spoke to a packed crowd in Nassau, Wednesday night. He added that any vehicle, once proven as essential to your business, will also benefit from a reduction in custom duties.

Minnis sought to respond to claims of being weak by the PLP leader, by turning the tables around on Christie, citing what he describes as his inability to “stop Munroe from cursing, Davis from misleading parliament, Ray from intimidating and Fitzgerald from begging”.

Meanwhile, Minnis addressed the chaos witnessed at the Advanced polling stations on Wednesday. He called on Perry Christie and the PLP to ‘stop trying to corrupt our voting process’. Minnis vowed to his team, that the FNM will be vigilant not to allow Christie to steal this election from them. He added that the scene on Wednesday was a “clear demonstration of overt incompetence and mismanagement of which they have demonstrated the last four and half years”.