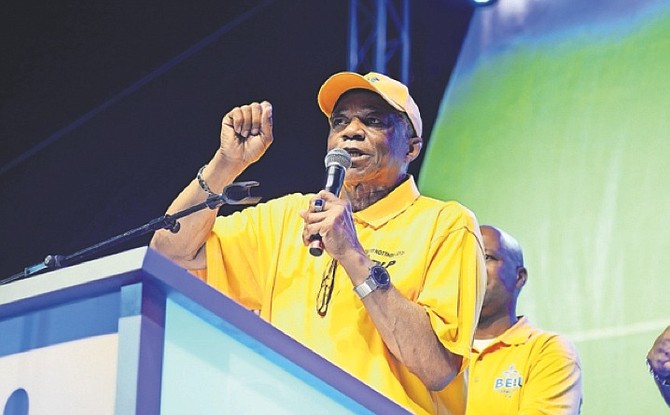 Bahamas, April 28, 2017 – Nassau – Bain and Grants Town MP Dr Bernard Nottage had to be seen by a doctor last night for “dehydration” after slurring and stumbling over his words during his speech at a Progressive Liberal Party (PLP) campaign rally at RM Bailey Park.

Dr. Nottage, 71, had to be aided on stage by his wife throughout the second half of his presentation, mispronouncing words and having to constantly correct his sentences. His dazed demeanour and incoherent speech led many in attendance to question his overall health in the moment. Dr. Nottage was force to wrap up his speech as the DJ played loud music to drown out his words.

Many of Dr Nottage’s colleagues on hand last evening were stunned by what had unfolded, and wondered how serious the entire ordeal was. PLP Chairman Bradley Roberts said that a doctor examined Dr. Nottage at his home shortly after he gave the worrisome performance.

“(I) understand that Dr. Bernard Nottage is said to be suffering from dehydration,” Mr Roberts told The Tribune. “He is at home resting. PM Christie spoke to him before midnight. He is expected to fully recover.”