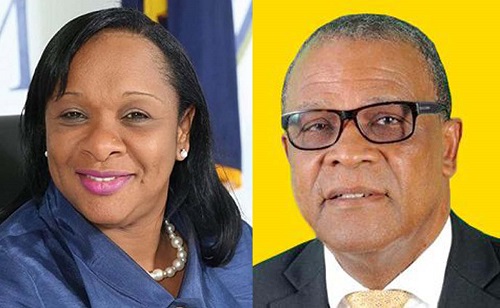 Turks and Caicos, March 6, 2017 – Providenciales – DOUBLE TEAM this morning as PDM Government and PNP Opposition gang up on the scourge of crime after a shocking weekend attack.  The assessment by the UK security team is underway confirmed just now by Opposition Leader, C Washington Misick and said he has met with the group.  “I am asking HMG to commit more resources… would look at TCI as a special case.  We need to look at what is missing… why are young men choosing a life of crime…”

We must support law enforcement and do what you can to protect yourself said the PNP House Leader.  If you are not aware of it already, the Premier can confirm duty free exemption on security surveillance tools.  Government and Opposition are not divided on crime he said.

Premier Sharlene Robinson said they are committed to get the axe to the root of the tree of crime.  Premier says this is a united national war on crime and a main goal at the stance this morning with the PNP is to erase the partisan politics linked to crime.  “Crime is not political.  We intend to work with the Opposition to ensure that HMG is doing all that it can for the people and national and internal security.”

Public ideas are welcomed, use of the crime stoppers hotline was encouraged.