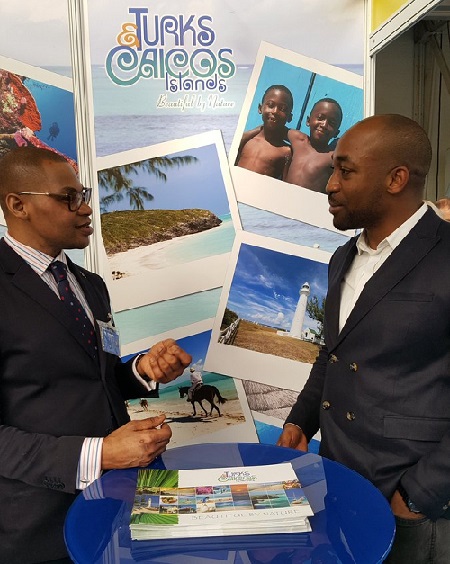 Providenciales, TCI, February 13, 2017 – Turks and Caicos continues to take seriously the potential of the European market, and though the Air Passenger Duty tax imposed by the UK on people flying over 2,000 miles is reported as increased slightly to £73 per person over the age of 16 years,  still interest in European tourists has not waned.

Courtney Robinson is the Marketing Executive for the TCI Tourist Board in London and represented the country at the recently held, Destination Holiday Travel show.   Over 70 tourist boards attend the event, billed as the UKs biggest and longest running travel show.
The TCI Tourist Board said by exhibiting at the prestigious event, many potential vacationers had a chance to learn more about the Turks and Caicos including world renowned Grace Bay Beach.   Also highlighted in the exhibit were the award-winning luxury accommodations and some of the more picturesque scenes from around the country.
The Destination Holiday travel show was on in London at the Olympia Exhibition Center from Feb 2-5, 2017.
#MagneticMediaNews