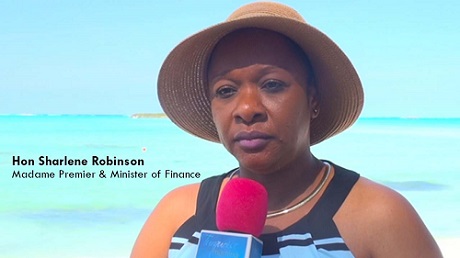 Providenciales, TCI, February 20, 2017 – Now over the halfway mark of the ‘first 100 days’, the PDM Administration is counting its work on the budget their biggest achievement so far since taking office.

In a one on one with Magnetic Media on Saturday during the Middle Caicos Valentine’s Day Cup, Premier and Finance Minister, Sharlene Robinson revealed that work had stopped on the country’s budget due to General Elections but that on Friday, the Fiscal Strategic Policy Statement (FSPS) was sent to London and that the new budget year will have a late start.

“We had a very little time to actually put our fullprint on it, but we made sure that with our capital projects, people will feel a PDM government.  And also in the recurring expenditure that’s what I had said earlier that we will be looking at National Security.  So we had a very short time to prepare the budget, because we have to be time sensitive it’s going be late, we intend to bring it to the house May, we have to bring it before July.”

A cry of the public had been that they were not feeling the spending.  Magnetic Media asked the Premier if the budget will live up to the change her party touted; she says it will:  “So you can look forward to feeling it, you can feel us in this first budget.  What you’re going to see is a lot of projects still continuing, and we want to continue those projects that we thought are in the best interest of the people.”

Bigger ticket items in the allocation of funds will support national security said the Premier.  “Our priorities will certainly be in National Security, anything to do with National Security we’re going to be responding as much as we can in this budget.  What they’re also going to see from us is a controlling of expenditure in terms of putting it in the right place.  And that’s what we have to do, we have to use our resources smartly.”