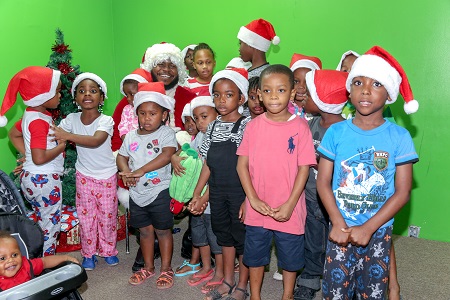 Providenciales, TCI, January 24, 2017 –  The Library Services of the Turks and Caicos Islands is comprised of five libraries situated across the islands.  The library is a place that anchors community life and brings people together.  To help the library fulfill its potential as a neighborhood institution, the Chief Librarian, Mr. Cecil Graham and his team, has developed a number of new initiatives aimed at strengthening library services in the Turks and Caicos Islands.

One such programme is the Christmas Pajama Party.   On December 17th, the Provo Public Library held the first Annual Christmas Pajama Party.   The party allowed children between the ages of 3 to 6 years, to dress in their pajamas and were kept busy with activities such as movie watching, playing games and being treated to gifts by Santa Claus.   Library administrators hope to not only make this an annual event but ensure that one is at each library across the islands.  The Ministry responsible for library services and staff of The Provo Public Library would like to extend a huge thank you to the following companies for their support and contributions that made the Christmas Pajama Party a success:

The Library appreciates your continued support in assisting us by encouraging the children of the Turks and Caicos Islands to read and improve their skills. Mr. Graham stated; “The Christmas Pajama Party was a true success for the library and we are confident that this will help build many other partnerships between the community and the library.”