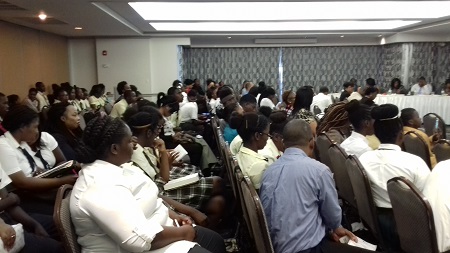 Providenciales, TCI, January 24, 2017 – Armed with facts, figures and well sharpened perspectives, battle ready is the most fitting description for the students who participated in the 19th annual HIV/AIDS debate. The moot this year “Be it resolved, societal awareness of HIV/AIDS is enough to guarantee zero new infections and deaths, fight stigma and empower people” was debated in an upbeat exciting and highly charged manner.

The Hon. Josephine Connolly stated during her remarks; “Despite the significant strides that have been made over the years by our government’s Health Promotion and Advocacy Unit, we recognize that stigma and discrimination continues to adversely affect HIV testing.”

She then asked; “Do you remember the early days of the AIDS epidemic and the devastation of those deaths, the sorrow, the loss? Today, that picture is transformed.  Thanks to the courage and love of so many of you in this room and around the world, awareness has soared; research has surged.  Prevention, treatment and care are now saving millions of lives.  Getting to zero is a worthy goal and we as a country need to make sure no-one is left behind.” 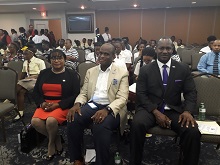 The Hon. Minister of Health, Agriculture and Human Services Edwin Astwood made mention of his love for debates and the skills demonstrated by the body of students who took part in the day’s competition.  High in commendation for the level of preparation displayed by participants, he also made mention of the ability of the students to develop their points with pinpoint accuracy like the gladiators of old to best their opponents.

The Minister mentioned that as a health professional he was particularly impressed with the standards set by the students in not only their delivery, but also in the construction of their arguments and efficient use of content.

In closing the Minister of Health Agriculture and Human Services stated; “Addressing stigma and discrimination at all levels is a priority within the Ministry of Health, Agriculture and Human Services. This includes continuous training of health care workers; improving workplace policies; sensitizing school staff and students; promoting education and training programmes on sexuality, gender equality and anti-bullying; advocating for law reform.”

First place went to Clement Howell High while Raymond Gardiner came in second with Long Bay High directly on their heels in third place.   The quality of the debate was evident in the close scores among the victors of the competition.   Best female speaker Jameika Noel of Clement Howell High and best male speaker Joshua Maghoo of Raymond Gardiner High schools.
Mrs. Robinson expressed how pleased she was with the level of debating skills of students and that there has been significant improvement over the years.   She also looks forward to seeing more high schools participate in the next debate.   She congratulated all debaters and debating teams stating; “Although there can only be one winner in a competition, each student was a winner in their own right.”

The Ministry of Health, Agriculture and Human Services wishes to say thanks to the hard working students, head teachers, teachers, parents and guardians, judges, RTC and Beaches Resort and Spa for making the 19th Annual HIV/AIDS debate a success.

Jamaica can have productive relationship with new US Government – Shaw