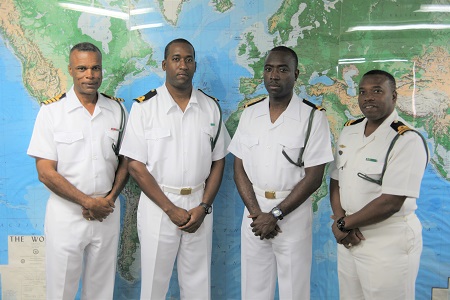 The rigorous seventeen-week Coast Guard course, sponsored by the International Military Education Training Program (IMET), was conducted at the United States Coast Guard Academy, New London, Connecticut, from July 27th through November 22nd 2016.  The course is design to educate and train officer candidates, to ensure that they possess the moral, intellectual and physical qualities for commissioning, and the leadership potential to serve effectively as officers.

The Nautical Science aspect included a two-week tour of duty aboard the US Coast Guard Cutter EAGLE, where the officers were required to apply the knowledge of Piloting, Maneuvering Boards, Rules of the Road, Ship Handling, Celestial Navigation, Shipboard Communication, Tides and Currents, Nautical Nomenclature and The Compass System.  The craft made patrols from New London, Connecticut to Baltimore Maryland and South Carolina, and also conducted several exercise drills.  Additionally, both Officers attended a two-day training session in Fire Fighting and Damage Control at The US Naval Base in New Port, Rhode Island, and o the craft.

The Leadership and Management section assesses the officer’s Leadership Abilities, Managerial and Conceptual abilities.  Evaluations are based on Personal Conduct, Military Aptitude, Situational Awareness and Leadership Positions.  They were also responsible for various administrative duties during their tenure at the school.  Both officers served in numerous roles, including Officer of the Day, Platoon Executive Leader and Damage Control Assistant Officer.  Sub Lieutenant Toote was selected Platoon Commander for the Special Drill Team, which made a spectacular performance at the graduation ceremony.

A 1994 graduate of the Government High School, Sub Lieutenant Berkley joined the Defence Force in April 1995 as a marine recruit, and successfully worked his way to the rate of Petty Officer.  He was a part of team of Defence Force marines to attend the Federal Aviation Administration training in Oklahoma City in 1999. Prior to attending the Officer Candidate School, he was previously assigned to the Training department and more recently, Squadron department.

Sub Lieutenant Toote joined the Defence Force in 2001 as a Marine Recruit after graduating from C. C. Sweeting Senior High School in 2001.  He was assigned to the RBDF Band in the post of Concert Master, prior to being selected.