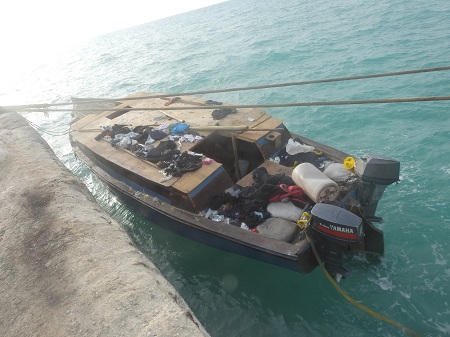 Providenciales, TCI, January 30, 2017 – As Police and Immigration Officials continue to search for corpses that may still be in the waters of the North West Point area of Providenciales from an illegal Haitian Sloop that capsized last week Tuesday, two illegal Haitian Sloops were intercepted late last night and the early hours of today (Monday 30th January 2017) as they attempt to make landfall.

Around 11:30 pm on Sunday 29th January 2017, the Royal Turks and Caicos Islands Marine Police intercepted a blue and brown 36-foot wooden boat three (3) miles from South Dock. The boat which was powered by two engines had one hundred and twenty-five (125) souls on board (ninety-eight males (98), twenty-seven females (27) and two (2) juveniles). 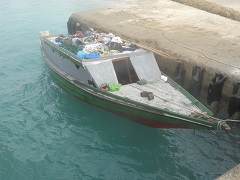 Marine Police later intercepted a green, red and gray 25-foot wooden boat around 4:15 am this morning, at the time it was 2 miles away from Five Cays. It was powered by one Tohatsu engine and had a total of fifty-three (53) souls on board (forty-six (46) males and seven (7) females.  A total of 178 persons from both sloops were taken to the Detention Centre and handed over to Immigration officials for further detention and processing for repatriation. A thorough search was conducted on the sloop for drugs and weapons, but nothing was found.

The Enforcement agencies of the Turks and Caicos Islands are asking that anyone with information concerning the whereabouts of any illegal migrants who came off any sloop or the planned arrival of other sloops to contact the Police anonymously on 911 or Crime Stoppers anonymously on 1-800-8477. Tips can also be submitted anonymously in English, French or Spanish on eitherwww.crimestoppers.tc or on Facebook as a fan of Crime Stoppers Turks & Caicos. Crime Stoppers tips are received in the USA.