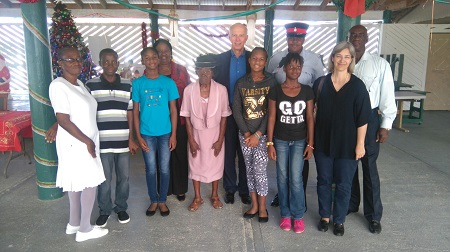 Governor was received by the District Commissioner, Mrs Almaida Wilson, and took part in a meeting with the local community.   He heard of concerns felt regarding the state of the airport runway, the degradation of the sea walls as well as the local wish to see a tarmac road.   He also heard arguments for Salt Cay being made a UNESCO World Heritage Site and undertook to make inquiries as to this possibility.

The Governor subsequently toured the Island and visited the airfield and the sea protections and hosted a lunch for the District Commissioner, the Police Officer and the local nurse. He offered seasonal greetings to those whose home is in Salt Cay as well as to holiday visitors.