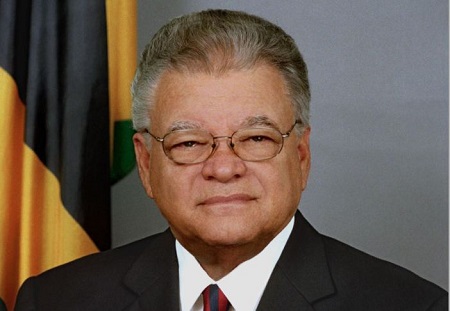 Kingston, Jamaica, December 19, 2016 – Minister of Industry, Commerce, Agriculture and Fisheries, Hon. Karl Samuda, has charged members of the Trade Facilitation Task Force to explore strategies that will enable the country to become more competitive within the Caribbean region and globally.

“We must collectively… concentrate immediately without delay on ways of reducing our charges at the port of entry… to remove bureaucracy from the process of both importing and exporting.   I happen to believe that an importer of raw material for the purpose of converting agricultural produce into agro-industry should be at the head of the line,” he said.

Minister Samuda was addressing a meeting with members of the body held at the Ministry’s offices in New Kingston recently.  He urged them to be specific in their recommendations and set time frames for which the measures should be achieved. “By so doing, I think the task force can make the greatest contribution with all players on board,” he said.

The task force, established under the National Competitiveness Council in the Ministry, is charged with improving the business environment in order to boost trade and enable the country to fully meet its obligations under the World Trade Organization (WTO) Agreement on Trade Facilitation.

Minister Samuda said the work of the body is critical to achieving economic growth.  He urged that stronger linkages be forged with the critical Ministries and Departments, in order to achieve its objectives as well as redound to the overall benefit of the country.

In the meantime, Minister Samuda said agro-processing “is the modern way to go” in order to retain the value of the goods that are produced locally.   He said the role of JAMPRO is critical in maximising the benefit from agro-processing.  “So, it is JAMPRO who must introduce our manufacturers to lucrative markets, not just to get investors to come in and invest but also to search out lucrative markets,” he argued.

For her part, Minister of State in the Ministry of Finance and the Public Service, Hon. Fayval Williams, urged the task force “to leave no stone unturned” in ensuring that the country’s trade-facilitation processes and systems are modernised and in keeping with 21st -century best practices.  “This is critical if we are to benefit from the renewed global investor confidence and the improved ranking from international rating agencies,” she said.

Trade facilitation is an integrated approach to reducing complexities and cost of trade transactions and ensuring that all these activities take place in an efficient, transparent and predictable manner.