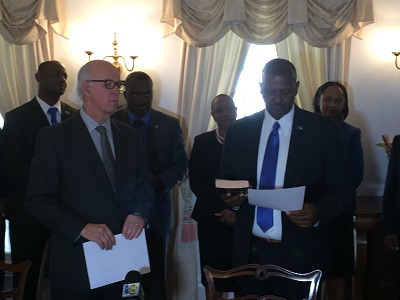 Providenciales, TCI, December 21, 2016 – It was day one of work today for the new PDM Administration and Magnetic Media is told that there were mainly meetings for the new ministers to become acquainted with their ministries; those sessions held in Provo.

When the PDM was the opposition party, during the launch of their Change Document, we asked about transitions and adjustments and what would be the first order of business for the party if elected to serve.  Well, in a landslide victory, the People’s Democratic Movement was elected to serve on December 15 with 10 seats in the House of Assembly … here are those replies from 14 days ago.  We asked, what would be the top priority for a PDM Government, now the Premier, Hon Sharlene Robinson had then said.

“Of course there are things that are immediate, even within their area, but we have to address so many issues simultaneously, because we have lost so much time especially in the last four years.   Immediately of course, is crime, border protection is immediate.  The housing investigation that we called for, as soon as they give us the pen with the ink, we will sign a letter to ensure that is underway.  The financial state of NHIP, a People’s Democratic Movement has to look at, very early, the total financial state of this country.”

With so much talk of how the British was blocking spending in the PNP Administration, we were also interested in what the PDM imagined their relationship with the UK Governor and outgoing UK CFO would be like.

“We’ve had an impeccable legacy of dialogue that was successful with the UK.  On my left is the Honourable Douglas Parnell, while he was the leader during the interim administration, was able to successfully be a part of negotiating that two hundred and sixty million dollar bail out.  And these are the things that we have as a part of our legacy, even when we are not in government they respect a PDM voice, they respect our voice, the investors respect our voice, if you really want a turn around in terms of our economy you have to elect a PDM government.”

The seven ministers were yesterday sworn in at the Governor’s residence in Grand Turk, upon arrival in Provo there was a Ministers motorcade, where the new PDM Cabinet climbed into those Chevy Suburbans and greeted waiting, excited supporters in a motorcade which ended in Wheeland at Froggies on the Beach.