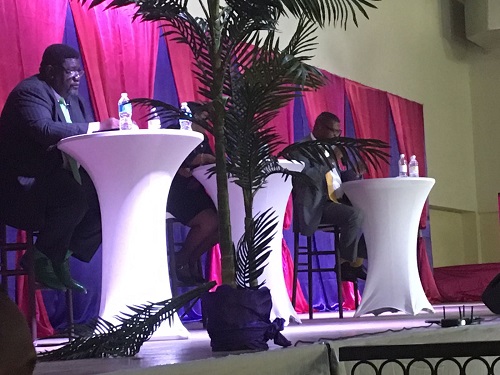 Providenciales, TCI, December 6, 2016 – The Leaders Debate was a fierce challenge last night as Rufus Ewing, Sharlene Robinson and Oswald Skippings aimed to woo any undecided voters through their answers to questions which came from moderators and the audience.

Reputation and Integrity, Experience and Ability, Fact or Fiction and Vision for the country were among the broad subjects coming through a variety of questions from Tremmaine Harvey, Trevor Musgrove and Kenrick Walters who moderated the three hour PTV & Shaun Malcolm organized debate.

PNP Leader, Rufus Ewing spent much of his time being double-teamed and defending or explaining the accomplishments of his administration over the past four years – he warned voters not to buy into the ‘doom and gloom’ messages from his opponents and touted accomplishments including the economic standing and health care model of the TCI as being top and envies of the region.

PDM Leader, Sharlene Robinson, the lone lady on the panel directed her focus to the PNP mainly, and on several occasions chided the premier for complaining about the British; for keeping important information to himself; reminding that the PNP is the reason for UK intervention and the need for a bail-out loan and essentially calling his leadership, failed.

She told voters that if their lives are not better, to vote for change.  PDA Leader, Oswald Skippings reflected on his two terms as Chief Minister with a record of building sports, education, saving a straddled economy in 1988 and with ideas on attracting inward investment.

Mr. Skippings spoke to the voters about his experience and effectiveness to get the British to do more about national security and to uncover the problems of what he believes is a crippled health care system.

Tonight, another debate to air on Ch2 on the Digicel network; it features the All Island At Large Candidates, well except for Michael Misick who in a press release explained that he will not participate because he feels all independent candidates should have the opportunity.  Misick said to leave the three district independent candidates out; namely: Valarie Jennings; his pal, McAllister Hanchell and JJ Parker – is disadvantageous to the trio and he will not support the face off.