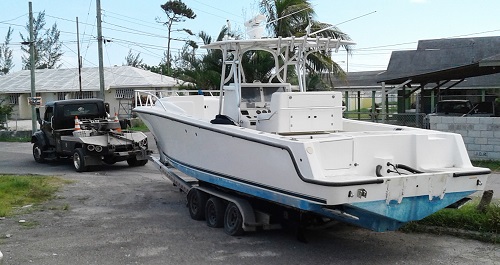 Nassau, Bahamas,  December 5, 2016 –  A 34-foot SeaVee center console sport fishing boat, worth $140,000, stolen on Tuesday November 22 from Treasure Cay, Abaco, was recovered in Nassau, thanks to the prompt action and dedication of an Association of Bahamas Marinas member.

On Sunday, December 4th, a second boat was stolen from a Treasure Cay canal residence. The 31-foot Jupiter was found in Baker’s Creek, with engines missing. Police are following up on leads concerning a car license plate.

The hunt for the SeaVee, however, was a 10-day chase across two islands. Captain Cliff Bootle, Marina Manager of Treasure Cay Beach, Golf and Marina Resort, reported the SeaVee missing in the morning of Wednesday November 23rd. The hunt ended when a close friend of Bootle’s found it on Saturday December 3rd, partly covered by a tarp in a lot behind a Nassau Village church.

The hunt was successful, says Bootle, due to the determination of his friend, social media posts—and a fortunate mistake by the thieves who set off a rescue beacon signal, picked up by the US Coast Guard. The sporty Boynton Beach vessel, called Desperado, was found stripped of its twin 250HP Yamaha four stroke engines but otherwise in good shape.

When the boat, owned by a Georgia resident visitor, was discovered missing on Wednesday morning, Bootle started searching the Treasure Cay area and reported the boat to the police. He began calling his industry contacts and his sister spread the association’s alert on Facebook. Days later on Monday the 28th, the post caught the eye of a dock staff worker from a Nassau marina who had seen a matching boat being towed down Soldier Road by a black truck. 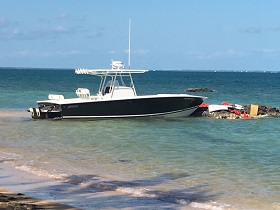 Bootle summoned a close friend who, on Tuesday, began canvassing south Nassau. A lucky break came on Wednesday November 30th when the US Coast Guard picked up a signal from the boat’s rescue beacon, accidentally set off by the thieves. The Coast Guard picked up two signals: one in Nassau Village and another in Marshall Rd. Bootle’s friend focused on the Nassau Village signal.

After days driving round, Bootle’s friend’s determination finally paid off. On Friday December 2nd, he spotted it in a Sequoia Road car wreck work yard, off Buttonwood Ave, behind the One Accord Pentecostal Ministries church. He thought it was the Desperado, but wasn’t sure. Captain Bootle caught an early morning flight from Treasure Cay and confirmed Desperado’s identity.

To secure the vessel, Bootle summoned the marina association’s contacts at Nassau-based Royal Bahamas Police Force’s Marine Unit, through ASP Carlton Adderley. PC Jones ordered a wrecker and the boat was secured with armed guards and taken to the police compound for fingerprinting.  The engines that were seen on the boat along Soldier Rd on Monday the 28th, had gone.

“Now we have to figure out who stole it. This time we were lucky,” said Bootle who attributes the good result to his determined friend, Facebook and the US Coast Guard.

“This is a case of doing everything possible to help a customer,” said Bootle. “We’ll move heaven and earth to recover any vessel from our marina.”

On reflection, Bootle says the government must do something drastic to stop the thefts. It’s hurting the Abaco economy and reputation.

“The police in the whole of Abaco only have one boat. It should have at least four, one for each area. The thieves know it’s hard to catch them. It’s an easy life and good living for them. We’ve tried to get government’s attention to make the penalties and bail conditions harsher, but the industry feels that the system is ineffective and not doing enough,” says Bootle.

“Although thefts are down 50% from last year, it’s still a major problem,” said the captain. “The laws are way too light. These thieves are caught but the next day they’re on the streets again planning the next one. Giving these guys light bail is a serious problem. They should all be electronically monitored. But even that doesn’t work sometimes.”

At the recovery scene, Pastor Preston Collins of the One Accord Pentecostal Ministries church, said he saw the boat being trailered into the yard behind his church, figuring it was innocently being bought for repairs. A witness saw the boat’s name: Desperado, Boynton Beach.

“The engines were on at the time,” said Pastor Collins, “But now they’re gone. They also sanded off the name. You can see the white marks where the words were,” said Rev. Collins pointing to the hull.

“The boat’s electronics and radar are still there,” said Bootle. “So, the thieves didn’t get everything.”

The marinas association President, Stephen Kappeler, praised his manager Bootle for having the care and dedication to fly all the way to Nassau to make sure the boat was recovered personally and quickly.

“This was superb case of going the extra mile to assist our marina customers. He didn’t have to go, but Cliff wanted to serve his owner-customer in the most safest way. He rushed to the plane with no concern for himself—no clothes, no toothbrush. He had to ask his family to put some clothes on the next plane. We’re proud of Cliff’s dedication and perseverance,” said Kappeler.

“Our thanks also go out to ASP Adderley and his Nassau RBPF Marine Unit and other officers. They came to the crime scene and brought in armed support to protect it from any further loss,” added the marina association chief. “We hope the brazen thieves will be caught, appropriately punished and put out of action, behind bars—with strict terms or no bail.”

Executive Director of the association, Bob Bower says: “Boat theft remains a major threat to boating yachting and fishing tourism in The Bahamas. For a real solution, this must receive attention from the highest levels.  In Abaco, the police need to be equipped with more than a single boat for responding or patrolling the entire Abaco chain, where the problem has been more severely felt,” he said.

“An island chain of this length needs a minimum of four active police interceptors: one for Hope Town and Elbow Cay, one for Marsh Harbour, a third for Green Turtle, and one in reserve for repair. In fact, each habited major cay or settlement could use one. That would total about eight patrol craft. And all the police should be trained in boat seamanship and equipped for night interception with night vision and searchlights. Inter-island and inter-settlement communications could do with a major upgrade,” said Bower.

The marinas association is trying to encourage all boat owners to do everything possible to secure their boats and engines. Boaters are urged to install tracking devices, alarms and engine and prop locks and dock owners and marinas are advised to employ bright lighting and video surveillance.

“Nowadays, every boat and engine should have tracking devices. They’re increasingly affordable and easy to install,” Bower said.

Bower, reflecting the opinion of his association’s membership, believes the penalties for boat theft need to be far more severe than they are at present. “The penalties are far too low”, he said. “The association has been asking government for seven years and more to address the boat theft problem. Police catch these life-criminals but easy bail terms let them out to steal their next boat. Bahamians and visitors—as well as the police—are tired of asking and the frustration of nothing getting done.”

“A big, nationwide effort against boat theft needs to be organized,” summed the association’s director. “Every stakeholder needs to be present at the table, and a definite plan made and close follow-up. The police are overloaded and don’t have anywhere near adequate resources.”

The Association of Bahamas Marinas is the united voice serving the Bahamas’ yachting, boating, sport fishing and marina industries.

Police from Nassau’s Marine Unit tow the recovered 34-foot SeaVee from the car wreck yard found behind a church in Nassau Village. The boat was hunted down over a 10-day period by a friend of Cliff Bootle, Marina Manager at Treasure Cay, a member of The Association of Bahamas Marinas.