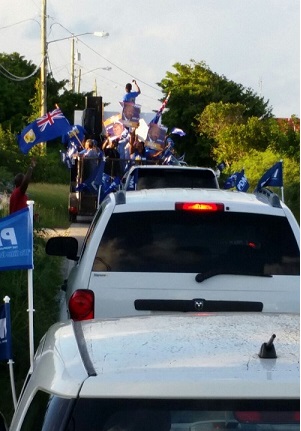 Providenciales, TCI, December 19, 2016 – The new ministerial government of the Turks and Caicos Islands is just hours away now from becoming sworn in and known to the country after a PDM win on General Election day.   It will happen for the party founded by the late Right Excellent JAGS McCartney in the 40th anniversary year of securing that right of ministerial involvement for indigenous people of the territory. 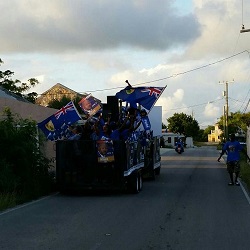 A three island thank you tour for supporters and voters is what the PDM Party, now the governing party, embarked upon immediately after soundly securing victory at the polls on December 15.   First stop on the tour, was North Caicos where Ralph Higgs, the former Tourist Board director delivered on a slam dunk for the party in blue… there was a motorcade in ED#4.

With a horse but happy voice, the new Premier, first woman to achieve the feat in the Turks and Caicos, Hon Sharlene Robinson gave testimony to the battles and the blessings on the road to elected government.   “Everything was against the People’s  Democratic Movement, one party was formed against the People’s Democratic Movement, but God!!  Now I’m not preaching, but I want us to be careful, be careful, we ran a great campaign.”

On Saturday at 5pm, Robinson and her team received the Proclamation of Premier in Grand Turk at the Governor’s residence; following that a celebration in the nation’s capital led by the PDM.