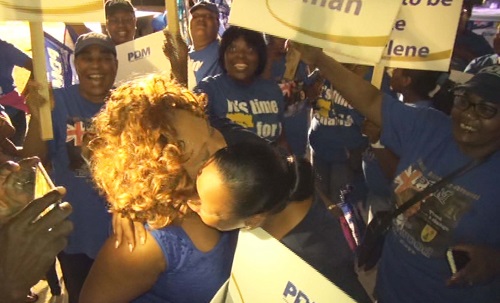 Providenciales, TCI, December 12, 2016 – Both political parties have had defectors this general elections; the PDM arguably with the most leaving its ranks to pursue a place in Parliament.

However, a major endorsement came on the weekend for Sharlene Robinson and the People’s Democratic Movement when a former high ranking and extremely popular PNP player endorsed Robinson during a spirited march to support the PDM Leader who could become the first female leader of the country.

The Women in Blue march was held on Saturday in Five Cays and that former Government Minister and once PNP Member of Parliament for Five Cays endorsing was the vocal, Lillian Boyce.

“I saw her working hard, I saw her fighting in the House of Assembly, outside the House of Assembly for people, taking bills to the House, and also giving a personal touch to families.  I can personally say, when my family needed a leader, she was right there for us. Mommy loves her, we love her as a sister, and it’s time we come home and support our own.”