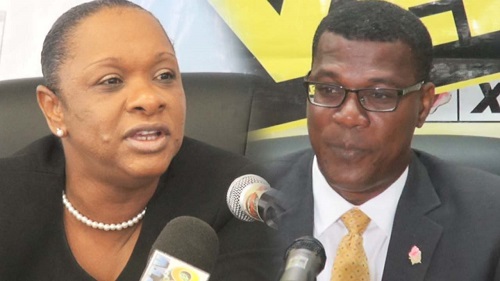 Providenciales, TCI, December 6, 2016 – Big ideas are touted by the political parties as they vie for election votes on December 15 and explain how they will finance what are ambitious plans for a buoyant economy.  The reduction in duty rate will not happen immediately says the Progressive National Party Leader, Dr Rufus Ewing.

The explanation follows comments including from the PDM Party that a cut back in the country’s leading revenue earner will mean hikes somewhere else.

Both party leaders were launching their manifestos when media enquired on these hot button issues.  Import revenue is at a significant high in the country.

The PNP says the duty reduction would not be immediate and does not mean a return of the ideas for broad based taxes like the UKs failed Value Added Tax or the PNPs failed, Payroll Tax.

“We will not on day one, drop duties to ten percent, and then wonder where the money is going to come from, we have to inject money into the economy first, we have to inject into the stimulus and the programs that we’re going to do, and then as we trade off, and as we increase volume then we have the opportunity to reduce the rate. There will never be a time, whereby the rate is so drastic that we will have revenue shortfall on the governing side, then will have to increase tax elsewhere. That is not the mark.”

The PDM leader said there are other ways the country is missing out on making money including taxing our airspace and VRBOs.

“We continue to have Vacation Rentals by Owners, VRBO’s, that is not taxed. Most of the yachts you see out of those docks, their paying pickings. We have planes that fly overhead, The Bahamas is projecting something like 15 million, their flying over our heads basically for free. We have presented to the government when we rejected value added tax, many different streams of revenue that does not have to be raised on the backs of our people.”