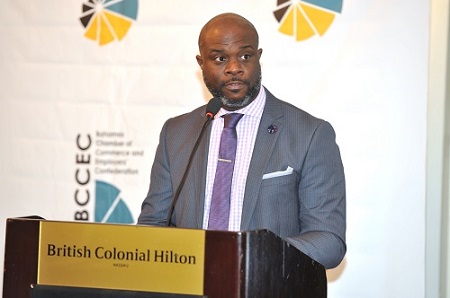 Nassau, Bahamas, December 19, 2016 – From the smallest detail like banning Styrofoam containers on a construction site at a planned Exuma luxury resort to powering an electric vehicle via a solar power charging station, the Bahamas Chamber of Commerce and Employers’ Confederation recent energy conference served up a harvest of innovative solutions to the problems of how to provide consistent, reliable power in a modern world.

“These are very challenging times for the energy sector,” said Chamber CEO Edison Sumner. “We must find ways to reduce our reliance on traditional forms of energy.”

That reliance – along with a dependence on government in order to get anything done – has resulted, said Sumner in a situation where electrical output, particularly in New Providence, is still dependent upon fossil fuels and an antiquated power generation system that is costly, challenging to maintain and unhealthy for the environment.

“For a very long time we have been ignoring our own welfare,” said Sumner, addressing business and civic leaders at the Chamber’s third annual energy security conference, hosted in conjunction with the American Embassy with patron sponsor Commonwealth Bank and held at the British Colonial Hilton December 13.   “We want to determine the future of the country when it comes to the energy sector and the impact the cost and quality of energy has on business and on our lives in general.”     Looking to the future, speaker after speaker recounted the need to act responsibly but independently.

It was the willingness to find their own vision and make it reality that led Shaun Ingraham and the One Eleuthera Foundation to purchase a rundown closed hotel and transform it into a training centre that has since been internationally accredited.   Sixty adult students have graduated with technical and vocational skills and certification.

“With 70% unemployment in Eleuthera, we needed to find ways to stimulate the economy,” said Ingraham.   “We got a license and created a credit bureau.   We partnered with five primary schools including The Island School which is totally off the grid. We got access to the 1.5 tons of trash the schools created and began recycling.  We started to crush the glass and turn it into countertops, floors, pavements. The cans went to Nassau for Cans for Kids. The plastic we shipped back to Nassau.”

In eight years, One Eleuthera Foundation has pumped $20 million into the local economy – and done so with a shared vision, equipping dozens with badly-needed skills, providing green jobs and operating with a mission to be economically viable and environmentally friendly.

Radiologist Larry Carroll, MD, discovered how important it was to operate without waiting for government to move forward so long as you were within the law.   He did it first in organizing a group of doctors to operate a private hospital, Doctors Hospital, and more recently as he neared retirement, in building a seven room resort in Schooner Bay, Abaco.

“The vision for Schooner Bay presented to me was to have a green, sustainable village based on old village models of years ago,” said Carroll.   “The village concept was built around the harbour.   Developers preserved the natural flora and fauna, provided geothermal heating and cooling.  They built the land up so if there were a storm surge, the run-off would flow into the wetlands. We recycle all our gray matter, maintain the indigenous vegetation.”   All utilities are underground.   Nine foot ceilings allow heat to rise, reducing the need for air conditioning.   Positioning of the residences also allows for best breeze flow.

Now, Dr. Carroll is trying to unite the Schooner Bay community to tackle the difficulty with energy.   “We have an hour power cut every day.   If we can de-politicize our thinking and our discussions and get together, we could put in a solar mini-grid in Cherokee Sound and sustain that community and Schooner Bay and we would not have to wait for anyone else.   We are too dependent on government and we need to just unite and do it ourselves.”

If Family Islands are drawing the blueprints for the energy sector, one of the most interesting is the model that will be set when construction starts on Children’s Bay Cay and Williams Cay in the Exumas.   According to Project Director Michel Neutelings, every aspect of design, engineering and operations is being created to utilize the latest technology to provide the most sustainable development.

“The waters of the Exumas are among the most pristine in the world so we have to strike a very careful balance, taking into account the dire need for economic development, sustainability of the environment and wishes of the community,” said Neutelings. “We will meet with every environmental group and will listen to the community before we put a shovel in the ground.”   And when construction starts, there will be a ban on Styrofoam.

The energy conference under the theme Eyes Wide Shut drew nearly 100 persons with the Deputy Prime Minister Philip ‘Brave’ Davis addressing the luncheon and advising that the new energy regime would allow power generation including solar to tie into the grid as early as the end of January.