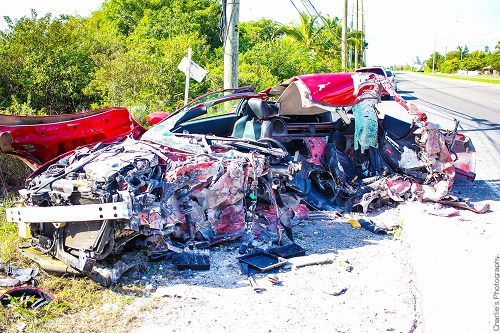 Providenciales, TCI, November 25, 2016 – Traffic Officers of the Royal Turks and Caicos Islands Police Force responded to a single motor vehicle accident that occurred during the early hours of this morning (Friday 25th November 2016) on Providenciales.

Around 12:27 am police, medical services, and fire officials arrived on the scene of the accident located on the Leeward Highway’s South Bound lane where they noticed a red Nissan 350Z car with extensive damages and a lone passenger inside. Due to the extent of the wreckage, the driver was trapped inside and was freed by the fire services using jaws of life.

The preliminary investigation revealed that the vehicle was traveling Westward on the Leeward Highway when it collided with a utility pole.  The driver, 36-year-old Shaun Dean who sustained serious injuries, was taken to the Cheshire Hall Medical Centre where he later succumbed to his injuries.

Investigators are continuing their investigation which includes attempting to locate anyone who may have witnessed the crash.

Anyone who witnessed the incident, who has not yet spoken to the police by calling the Chalk Sound Police Station 338-5901/941-8067.