Providenciales, TCI, June 3, 2016 – The choir of voices across the TCI about the departure of now former Director of Public Prosecutions, John Masters is akin to the famous song from the Wizard of Oz when the wicked witch was killed.  Masters had obviously built an infamous reputation that spawned battle headlines and which seemed to pit him against his staff, the leader of the Opposition, members of the Bar Association and even a newspaper Editor in Chief.

Very early into his tenure problems emerged as Masters was accused of selectively hiring consultants, demoting and transferring and demoralizing staff.  Opposition Leader and Attorney Sharlene Robinson had a lot to say today upon learning that John Masters resigned and has left the Turks and Caicos. 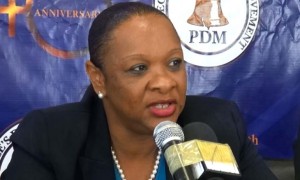 Hon Sharlene Robinson, PDM Leader;  “I am hoping that what we can get is full clarity, especially for those persons reputations where he accused them of certain things in particular the acting DPP. Where we can get something from the In integrity Commissioner or the Governor’s Office to say there was nothing untoward why this person was let go or suspended.   So that at the end of the day, this period does not follow those persons.  I think Angela Brooks deserves that, there was never an investigation that caused her to be put on administrative leave, and I think it’s important that the governor, or the integrity commission, whomever certainly puts that out there.”

The Governor’s Office this morning confirmed to Magnetic Media the exit of Masters who had been under investigation for these alleged misdeeds in office.  Mark Fulford, attorney and partner at F Chambers Law firm last week called for the DPP to resign, today he too expressed ‘good riddance’ sentiments. “I was also of the view, that the DPP had lost the confidence of his staff, due to the investigations being carried out by the Integrity Commission among many other things taking place in his office.  It was therefore for these reasons, that I had called for the DPP to do the honorable thing, and step down, from office.  Today it came to my attention, that the DPP has heeded my call, and has tendered his resignation.”

Masters, who is originally from Australia and had worked 27 years in the UK and the Cayman Islands started on in the Turks and Caicos’ DPP job in April 2015; he reportedly left the country without any notice to staff yesterday.