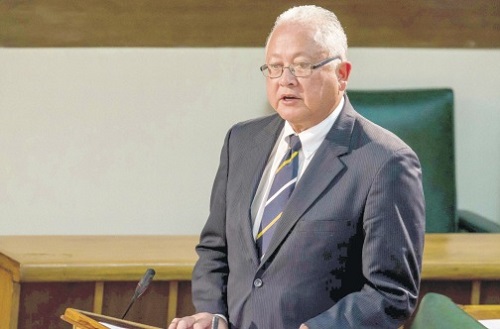 Montego Bay, Jamaica, November 8, 2016 – Minister of Justice, Hon. Delroy Chuck, says cyber-crime is a major global threat that represents a clear and present danger to democracies and the rule of law everywhere.   He said there is an urgent need for the strengthening of international cooperation and the harmonization of policy and legislative instruments in the criminal justice system to combat the threat.  “Mobile fraud has increased by 173 per cent between 2013 and 2015, and while mobile transactions are growing, fraud is growing at an even faster clip. In 2015, 45 per cent of all transactions originated from the mobile channel, while 61 per cent of fraud attempts were made from a mobile device,” he noted.

He said that cyber-crime costs are projected to reach US$2 trillion worldwide by 2019 and the cyber-security products and services market is expected to grow from US$75 billion in 2015 to US$175 billion by 2020.  “We are confronting a boundless and borderless threat and an unprecedented threat to the global economy and global security,” he stressed.

Minister Chuck, who was addressing the 4th North American and Caribbean International Association of Prosecutors (IAP) Conference at the Montego Bay Convention Centre, St. James, on November 3, said that in light of the challenges, societies cannot now afford for a fragmentation of cyber-crime laws, divergence of procedural powers, lack of access to extraterritorial data by law enforcement authorities, and ineffective international cooperation mechanisms.

He said legal luminaries everywhere must be bold in considering options to strengthen the legal, institutional, investigative and prosecutorial mechanisms to combat cyber-crime.  “We must come together,” he stressed.  “We have to face the realities, the challenges and do what is necessary to ensure the protection of our communities.  We cannot afford for the criminals to beat us. That is something we should not even try to fathom, as the consequences would be too grave to even contemplate,” he argued.

For her part, the Director of Public Prosecutions (DPP), Paula Llewellyn, acknowledged that combating cyber-crime is challenging but expressed confidence that “together we shall not only persevere, we will also be victorious”.

She noted that the conference provides an opportunity to examine a wide range of areas as it relates to the issue.  “Our objective is to ensure that cyber-crime does not continue to undermine good governance, democracy and the safety of our citizens,” Ms. Llewellyn said.

The three-day IAP conference was attended by prosecutors and law-enforcement officers from more than 24 countries in the Caribbean, United States, Canada, and Europe.  The discussion focused on a wide range of topics relating to prosecution and ways to make the justice system more effective in addressing cybercrime.