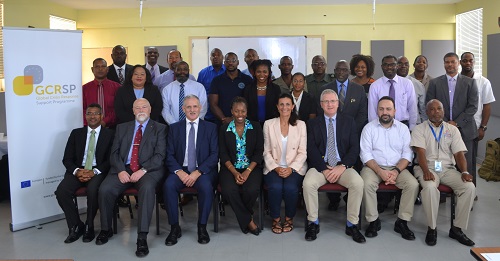 Barbados, November 16, 2016 – The Caribbean is not isolated from the impact of man-made and natural disasters, as the impact of Hurricane Matthew demonstrated recently. The Caribbean region’s increasing vulnerability to these threats demands a coordinated approach from its regional organizations.

With the aim to improve their current coordination mechanisms and to establish a virtual crisis room, regional experts from the Caribbean Public Health Agency (CARPHA), the Caribbean Disaster Emergency Management Agency (CDEMA), CARICOM Implementation Agency for Crime and Security (CARICOM IMPACS) and its two sub-agencies the Regional Intelligence Fusion Centre (RIFC) and the Joint Regional Communication Centre (JRCC) along with the Regional Security System (RSS) converged at a series of workshops. The agencies will work on a Joint Civil Protection Coordination Plan to support the establishment of a virtual crisis room for the Caribbean.

These workshops which are being held in Barbados from 14 – 18 November 2016, are part of an initiative funded by the European Union, the Global Crisis Response Support Programme (GCRSP). The GCRSP Programme is in its third phase, to not only develop the virtual crisis room, but to facilitate bringing together the wealth of knowledge of these four regional organizations and the skills developed in previous phases of the programme. Following these workshops, there will be a command post exercise in early 2017 to test the Joint Civil Protection Coordination Plan and the CARICOM Virtual Crisis Room.

In his welcome remarks at the opening ceremony, Major Michael Jones, Chief Operations Officer of the JRCC said, “Given the varying roles of the Agencies present, we recognize that a crisis is not only hurricanes or earthquakes but it can be along the lines of the potential and debilitating effects of health crises such as we are seeing now with Zika and the crime crisis where homicide rates continue to increase in some of our CARICOM countries and where potential threats such as terrorism have the ability to affect economic growth and development.”

Participants agreed that the knowledge gained will assist them in strengthening their existing crisis management infrastructures, which in turn will assist the entire CARICOM region.