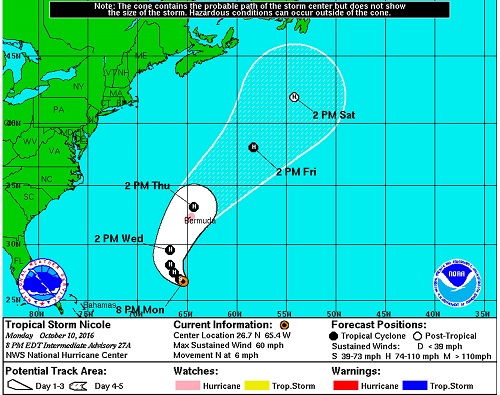 Nassau, Bahamas, October 11, 2016 – News Item on Tropical Storm Nicole issued by the Bahamas Department of Meteorology forecast office section, at 6am Tuesday 11th October, 2016.  Nicole has not strengthened yet…… 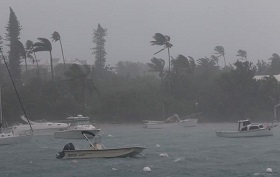 At 5:oo a.m EDT, the center of Tropical Storm Nicole was located near latitude 27.1 degrees north and longitude 65.9 degrees west or about 365 miles south of Bermuda.

Nicole is moving toward the north-northwest at 5 mpm.  This general motion should continue today.  A turn toward the north and an increase in forward speed is expected on Wednesday.

Maximum sustained winds remain near 60 miles per hour (mph) with higher gusts.  Some strengthening is forecast during the next 48 hours, and Nicole is expected to become a hurricane later tonight or Wednesday.