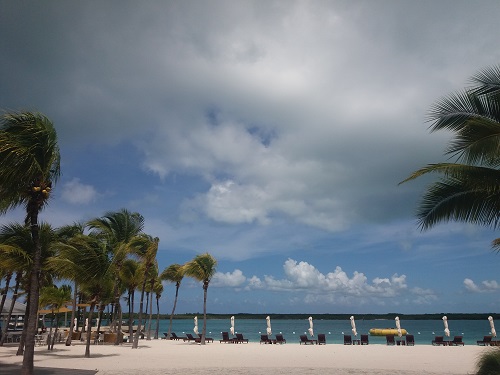 Providenciales, TCI, October 3, 2016 – The Turks and Caicos is under Hurricane Warning as slow moving, powerful, category four hurricane Matthew makes his way north now bringing daunting reports for regional countries like Jamaica, Cuba, Haiti, the Dominican Republic, The Bahamas and the TCI.   Matthew’s winds are decreased this morning, at 130mph and forward speed is up a notch at 6mph – still he remains at Cat4 storm.

Updates continue from the Department of Disaster Management and Emergencies and led to a rush to grocery stores yesterday to fill up on food supplies; we should be getting enough for three days at least.  Notices went out that sand bags are available at the TCI Red Cross and District Commissioners offices and with the help of the DECR, can be filled up with beach sand.

Two government sponsored flights from Jamaica brought students studying in JA home, only three, including Olympian Delano Williams opted not to journey back on the interCaribbean Airways flights this past Saturday.

The eastern quadrant of category four Hurricane Matthew is where the rain is and countries like Haiti are forecast to get as much as 40 inches of rain; it is forecast that the TCI will get 8 inches of rain. Another forecast says, the Turks and Caicos could see a 6-8 foot storm surge.  Effects of the storm are forecast to impact the Turks and Caicos by late Tuesday.  Later this morning, DDME Director, Dr Virginia Clerveaux will bring Magnetic Media and all media up to speed on what is happening as it relates to shelters, schools, flood plans and more.

Related Items:matthew bearing down on jamaica and hispaniola, residents need to get ready for storm, tci under hurricane warning