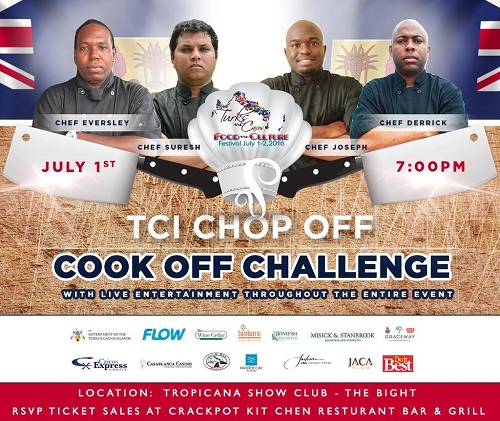 Providenciales, TCI, July 4, 2016 – Eversley Rowe from Montego Bay Jamaica, the lead chef at Kalookis Restaurant in Blue Hills is contestant number one and says he dreams of opening a culinary school catering to the smallest of children… Chef Charles Joseph originally of Haiti is contestant #2 and is the lead chef at the West Bay club and recently secured a silver medal for seafood at the Taste of the Caribbean regional challenge… Chef Suresh is from the Grace Bay Club and is the third culinary contender and hails from India but has worked in kitchens around the region, starting at Carnival Cruise Lines… and the fourth in the TCI Chop Off culinary challenge slated for tonight at the Tropicana Show and Supper Club is Derek Carter who has been in the TCI for 16 years and hails from Jamaica.  Carter is from the Beaches Resort and says his style of cooking is clean and simply Caribbean.

The event sponsored by a slew of local companies but mainly Flow and the Turks and Caicos Islands government has three tiers of tickets including Very Very Important Person or VVIP.  Tomorrow, the venue shifts to the Salt Mills Plaza for a cultural show including some 35 bands and countries on display… which includes of course their native foods.  It is the second year for the Turks and Caicos Islands Food and Culture Festival.