Providenciales, TCI, October 23, 2016 – This released from Police: Thieves used a truck to rip out a Scotia Bank cash machine from a MoneyGram location in Down Town area of Providenciales earlier this morning (Sunday 23rd October, 2016.)

Before the ATM Theft, around 10:44 PM on Saturday, 22nd October, 2016, a group of three masked men robbed a man at gunpoint in the Discovery Bay area before making away with his black F150 Ford Truck including his phone and small amount of cash.  Police responded to the scene and a search begun for the stolen vehicle.

Around 3:59 AM this morning, police noticed two bandits ripping the Cash Machine out of its position with a chain connected to the same Truck that was reported stolen earlier.  Upon approaching the bandits, they open fire at the officers.  An exchange of gunshots has ensued before the culprits made good their escape on foot in the nearby bushes in the direction of Kew Town. 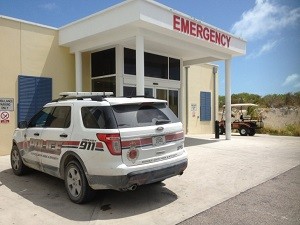 At 4:20 AM, a complainant approached officers while on scene and reported that she had just reached home on Walter Cox Drive when she heard a loud noise and was immediately approached by two masked males described as one wearing all black, while the other wearing black and red shirt, long black pants with black cloth over his face and a black rifle in his possession.  They threw her to the ground and kicked her about the body before attempting to get away in her vehicle but were unsuccessful.  The lady then realized that she received a gunshot to the thigh.  She was taken to the hospital where she is being treated.

The bandits remain at large.

Anyone who witnessed the incident, who has not yet spoken to the police by calling the Chalk Sound Police Station 338-5901/941-8067, or who has seen any suspicious activity in the vicinity of the Moneygram location in the Downtown area next to the Shell Gas to please call Crime Stoppers on 1-800-8477 or use the Crime Stoppers online reporting page: www.crimestoppers.tc, the information you provide will be treated in the strictest of confidences.  We remind people they should not report crime information via our Facebook and Twitter page.