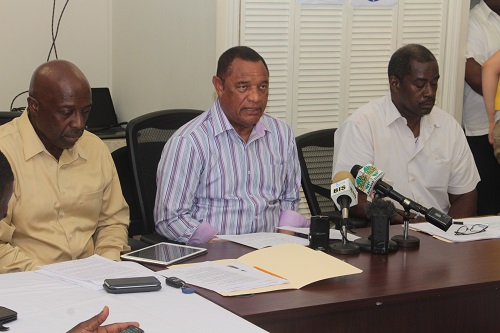 Nassau, Bahamas, October 10, 2016 –  Prime Minister the Rt Hon Perry Christie has appointed the Hon Shane Gibson, Minister of Labour and National Insurance and Minister of the Public Service, the Coordinator for the Hurricane Matthew Relief and Recovery efforts.  The Prime Minister officially made the announcement during a press conference on Sunday, October 9, 2016 at NEMA on Gladstone Road.

Mr. Gibson will work closely with Captain Stephen Russell, Director of NEMA in the national relief, recovery and reconstruction efforts.  Captain Russell said he is looking forward to the newly formed partnership as NEMA forges ahead with the recovery efforts following the Category 4 storm.

Hurricane Matthew traversed the entire Bahamas, however the preliminary assessments indicate that New Providence; West End, Grand Bahama and Lowe Sound, North Andros were severely impacted and given the extent of the reported damages thus far, a massive coordinated relief and  recovery response is required.  This is the first time in years that New Providence, where the majority the population resides, has been severely impacted by a hurricane.

Mr. Gibson gave the assurance however that all impacted areas in the country will be given equal and urgent attention. Thus far, the reports from the other islands indicate that where damages occurred, can for the most part, be restored by local efforts.  “We have a tremendous task ahead of us which will require the removal of territorial boundaries that often exist between Government Ministries and Departments. We are working towards one goal, the full restoration of our impacted islands in the shortest possible time,” Mr. Gibson said.  He also said that the recovery efforts will require the total involvement of both the public and private sectors. Considerable manpower and financial resources will also be required.  “Some offers of external assistance have already been received and we expect that more will follow in the coming days,”

The Prime Minister acknowledged that the challenges go beyond the capacity of NEMA. And where the law is structured to give NEMA powers, the central government has to be more involved due to the exercise and that too many people being affected.  “Homes have been destroyed and cannot be occupied. The devastation in Lowe Sound and West End is horrendous,” he said.  Added the Prime Minister: “The issue we have to address is when people build in the same place; every hurricane we would be faced with the same problem. Looking at it, we have to first of all ensure that the structure of NEMA is able to address the issues in a coordinated fashion.” 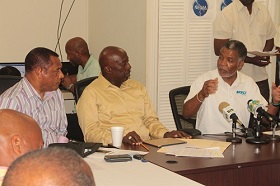