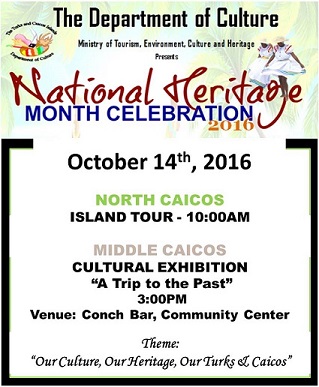 Providenciales, TCI, October 10, 2016 – Today is a public holiday.  No longer Columbus Day, now National Heritage Day and there will be 42 people celebrated at the National Awards Ceremony this morning at 10 in Grand Turk on Parade Grounds.

The list is long and filled with exceptional islanders who have added to the quality of life here in the TCI.  Two will get the Order of the TCI prize; four will receive the Cayos Medal for patriotism; there are 25 for the long service medal including four former chief ministers; four individuals will be medaled for meritorious service and seven will be bestowed the national Young Achievers medal.

You can see the full list of honorees released on Friday to media at Magnetic Media TV.com.  Those named had also been Gazetted weeks before.

Also today, a float parade from Grace Bay to the Blue Hills Jetty at 3pm.  Police advise that due to the motorcade and other events planned in Blue Hills; there will be a traffic detour as the road will be closed from the Blue Hills Jetty to old Smokey’s on the Bay on Bay Road from 11am to 11pm.  Motorists are asked to use Millennium Highway.
Onsite there will be sail boat racing and domino tournament with the Premier’s Cup reward plus rip saw music and native show with live band performances by V6, Harbour Heights, Youth Vision, Lassie Doh Boys, Island Boys and Q Bank Links. 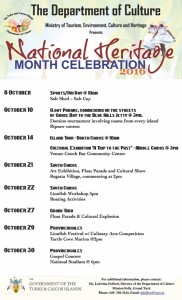