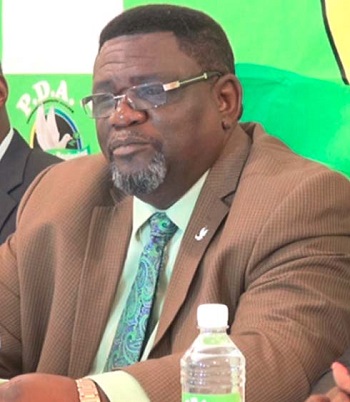 Providenciales, TCI, July 7th, 2016 – The Progressive Democratic Alliance rolled out a long and condemning list of undones and ignored issues by the PNP Administration, and said the electorate will not be fooled by projects now being rushed to completion; Oswald Skippings leader of the PDA gave strong statement on the state of affairs from his vantage point adding that paving roads is mandatory work, not visionary work.  “Let’s build a couple roads, nice roundabouts, but I put you on notice, you are mistaken because people are catching too much hell to be fooled again.  People’s lights are off, their refrigerators are empty if they have any electricity.  Their children are unemployed, they are jobless.  These are the realities that they cannot forget on election day regardless of how black and how smooth the road is on their way to the polls.”

Skippings, a prolific speaker brought his A game as he said it is time to focus on what matters.  “Our homes are up for sale by the liquidators or the banks, we have lost our insurance policies that we have invested in for years and years.  We have lost millions of dollars that we have deposited in TCI bank, we have lost sixty percent of our retirement benefit from the National Insurance Board, money that we have paid in.”

And there was no holds barred for his former party the PDM, whom he chided for as he put it sitting by and allowing the PNP Administration to run ram shod over the people.  “The government allowed it to happen, first in the interim, then the PNP government, and the PDM sat right down like they were fed a gallon of calm nerve juice.”

The PDA is still trying to fill three at large candidate spots… and said they are the party which will keep God in governance.