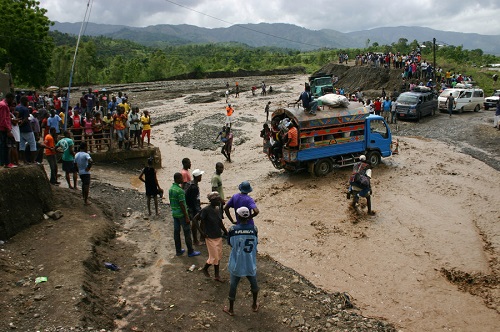 Magnetic Media has learned that at least one local airline company is offering to take any goods to the storm ravaged Haiti for free.  It was confirmed to us moments ago that since the airport reopened in Haiti last Thursday, residents of TCI who originate from Haiti have been sending clothing, food and drinks and no cargo fees have been applied by Caicos Express Airways.

It was explained that the airline, which flies to both Port Au Prince and Cap Hatien, is partnering with cooperate Haiti to make this happen and anyone is welcomed to bring donations to Caicos Express for the over one million people UNICEF reports is displaced by the storm.  This figure includes half a million children.

It is said that 175,000 Haitians are in need of assistance and that it will take $5 million USD to answer to the immediate needs of the people of south west Haiti.  Caicos Express said they ran special and additional flights immediately following the passage of Hurricane Matthew in response to the demand by Haitians who call both countries home.