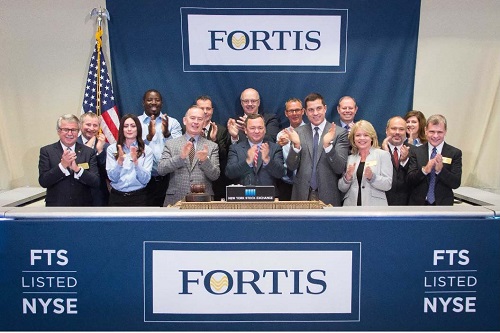 Providenciales, TCI, October 19, 2016 – Fortis Inc., the Canadian-based parent company of FortisTCI, made its debut on the New York Stock Exchange (NYSE) on Friday, October 14, 2016, marking a historic milestone for the Company.  President & CEO Barry Perry celebrated the occasion in New York by carrying out the ceremonial ringing of the bell to open the exchange for trading.  Mr. Perry was joined on the floor and the podium of the exchange by executives and CEO’s from across the Fortis Group, including FortisTCI’s CEO, Eddinton Powell, CFO, Ruth Forbes,
and Manager of Plant Operations, Alvejes Desir.  Celebrations were also held across all Fortis Companies in Canada, the United States, and the Caribbean, including the Turks and Caicos Islands.

The NYSE is known as one of the world’s premier exchanges and will give Fortis access to capital markets in the United States where there is a larger investor base.  Fortis Inc. will also remain listed on the Toronto Stock Exchange (TSX) in Canada where it was founded making it a dual listed company. 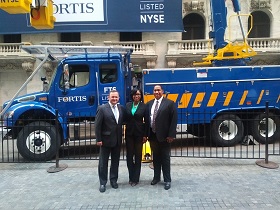