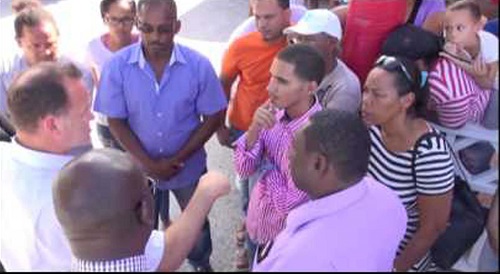 The Dominican Community gathered at a site which is usually for their joyous festivities, today though the mood was somber as those from the DR living in the Turks and Caicos aimed to organize to assist police in their search for 26 year old Sorineida Arias.  Magnetic Media was on the scene near the down town ball park, where Dominicans were visibly upset and understandably concerned as this is the second case of a missing woman from their community for the year.

“I hope the evidence now comes for true.  The only thing I need is justice, for every Dominican they kill up here for nothing, like maybe some people believe the Dominican is dog or whatever, that’s not true.  Plenty Dominican come up here to work hard.” – member of DR Community

“We are now planning how we’re going to conduct the search, where we are gonna go, and how we’re going to do it, that’s what we’re gonna do now.  That search will be based on assumptions that we may have, that we are trying to put together to see how it will go.” – Edwin Hernandez

Sorineida Arias went missing on Sunday July 10  and was last seen around 4 a.m at her home in Five Cays.   The first young woman was found in bushes in North West Point Provo; also 26, it was Uneira Veras who was found dead on April 23rd at Pirate’s Cove; her murder remains unsolved.