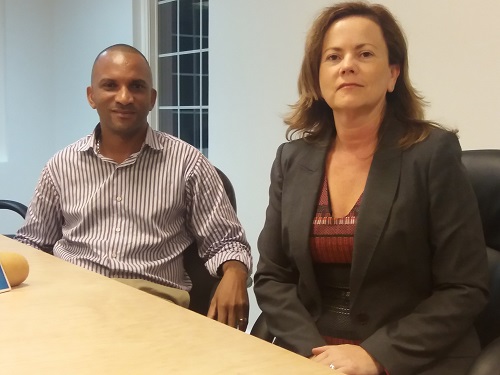 Providenciales, TCI, October 18, 2016 – Digicel defended its company reputation in a late day interview with Magnetic Media yesterday aimed at setting the record straight on what is happening at the telecommunications organization; and there to send the strong message to islanders was current CEO, Sinead O Marcaigh and EJ Saunders who remains a Director and shareholder of Digicel.

Saunders said he is an investor in Digicel and would never sit on a board which supports disenfranchising Turks and Caicos Islanders.  EJ Saunders’ name appeared on placards of demonstrators who protested outside of the Leeward Highway headquarters of the company on Monday; the move by Digicel to make redundant seven staffers, including six Turks and Caicos Islanders has been met with vociferous objection.

To our question about the make-up of their staff, Ms O Marcaigh explained that 60% of its senior management are Turks and Caicos Islanders, that they had increased staff to 75 since their right-sizing during the acquisition of WIV and overall, there are currently 11 work permit holders, and that figure will soon be reduced to nine. 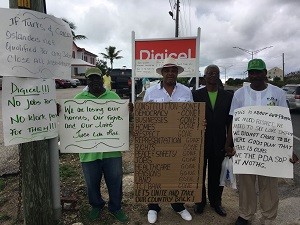 Protesters and press releases have called for Digicel to rehire, to instead let work permit holders go and attorney Finbar Grant even recommended to workers to take strike action and shut Digicel down.

Magnetic Media learned too, that none of the political leaders seen in the protest have requested a meeting with Digicel to discuss their grievances face to face; at least one of the protestors is asking the country for the opportunity to be its Premier come next General Elections.

The Immigration Board, in a rare interview given by its Chair, Sheba Wilson, threatened the revocation of work permits at Digicel and O Marcaigh admitted to Magnetic Media that the company is under review by the Board.

It was also explained by both Saunders and O Marcaigh that they are confident the Immigration Board will find that Digicel is being fair and sincere in its need for the work permits to improve on its telecommunications network in these islands.