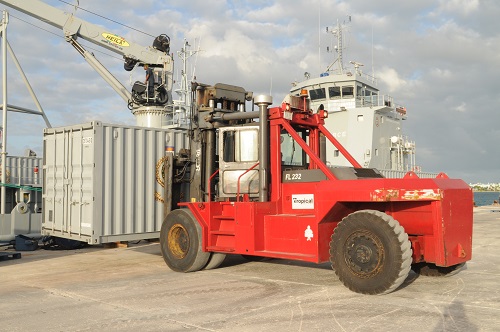 Coral Harbour Base (RBDF), Bahamas, October 13, 2016 –  Sometimes the hard work performed by committed nation builders goes unnoticed. The Royal Bahamas Defence Force however, wishes to pause and acknowledge the unwavering support that the CEO of Tropical Shipping, Mr. Mike Maura, who has provided support for our team since the recovery efforts in the wake of Hurricane Joaquin last year.  Mr. Maura says he believes that people are trying to help themselves and for him it was an easy task to commit too.

The company assisted in the past, working with NEMA and in particular, loaning equipment and operating personnel to assist in loading the self-sustaining 17-piece containerized mobile base, onto the Lady Rosalind enroute for the devastated Crooked Island in 2015.

Incidentally on National Heroes Day, they continue their support, this time going further.  Mr. Shervin Rolle, a native of Exuma and employee of Tropical Shipping, skillfully operated the forklift he endearingly refers to as the ‘BIG RED’ to hoist the 17 piece base onto HMBS Lawrence Major.   Additionally, Mr. Rolle will make the journey with the vessel and help them to set up the Base, in Mastic Point Andros, using the BIG RED, before his return to New Providence later in this week. 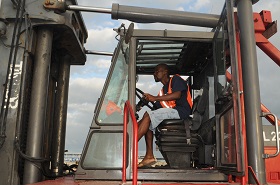 The Royal Bahamas Defence Force is committed to ensuring its mandates and extensive missions are carried out.  However, as succinctly said by Captain Tellis Bethel, Commander Defence Force (Acting), “these encouraging acts of goodwill carried out by concerned citizens of our country, in tandem with our own duties, make our job easier and help restore our country faster and more efficiently”.

Captain Bethel extends deepest gratitude on behalf of the Minister of National Security and members of the Defence Force to the many private individuals, nongovernmental organizations and members of Corporate Bahamas who continue to cultivate the spirit of a united Bahamian people, moving this small nation forward, upward and onward through progress.”

RBDF Photo one shows: The “BIG RED” forklift and its operator assisting with the loading on of the Defence Force’s mobile bases onto HMBS Lawrence Major on Monday afternoon. Those containers were taken to Morgan’s Bluff, Andros to assist the community in the aftermath of Hurricane Matthew.

RBDF Photo two shows: Forklift operator, Shervin Rolle as he prepares to assist with the loading of the Defence Force’s mobile bases onto HMBS Lawrence Major on Monday afternoon. The forklift, which is owned by Tropical Shipping Company, was also taken to Morgan’s Bluff to assist with the offloading of containers.

Premier pledges support for Bahamas in aftermath of Hurricane Matthew