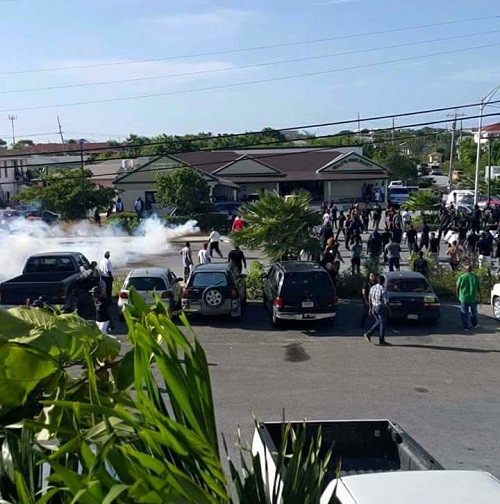 Providenciales, TCI, July 18, 2016 – A peaceful protest arranged by the Dominican community to demonstrate against deadly violence in the TCI turned riotous and created a volatile situation on the country’s gateway strip, Airport Road late yesterday.  Images are in wide circulation and are extremely concerning as they not only show that police had to use tear gas to subdue the angry protestors, who were dressed in black and who had just marched from the Gus Lightbourne Gym in a show of solidarity in the aftermath of the murder of 26 year old Sorineida Arias; but exposed the fragility of the relationship between Police and DR natives.

Video revealed Dominicans stomping and kicking, who could only be Police Officers on the ground in the street.  Dominicans we spoke to gave their account of what happened to cause the anti crime rally to turn violent.  “There was a man, a Dominican man at the supermarket, who people were saying that he bought a beer and when the police saw that he was drinking that beer on a Sunday, you know, because it’s illegal, that’s when they start beating the guy and that’s when people start running because they saw what was going on.  So people start running to them, and what the community is saying is that it was wrong for them to do that to the guy.  What they should have done was to go to the supermarket and ask them why are they doing that, why are they selling alcohol on a Sunday.”

“I saw Dominicans on camera though beating the police officers.” – Deandrea Hamilton

“Because they started to beat the guy.”

And the plan for Dominicans was to remain until Police released the man, who we were told is named Abraham and in his mid-30s; we caught reaction at news that he was let go. “We are very disappointed with the police you understand.”

“So this guy didn’t pull the knife out at the police?” – Deandrea Hamilton

Country leaders came out strong in statements today against the riot which broke out and actions that led to several police officers being attacked by angry protesters during an anti crime march held yesterday by the Dominican Community.

Police explained in a media statement today that the man arrested is out on police bail, after being held for numerous infractions.  The release explains that the Dominican man appeared intoxicated and was warned by an officer at the scene about his behavior and drinking of a beer, believed to have been sold to him illegally on a Sunday.  That led to the man becoming aggressive, police say, and it led to the Police officer, trying to make an arrest.

I quote from the statement now, “A group of persons approached the officers by making threats and use of abusive words in their native language while trying to take the man away from the police lawful detention.” End quote.

That explains the kicking and stomping filmed by bystanders as officer Kevin Clarke confirmed that a number of Police were assaulted in the melee.   Reports are, up until that confrontation the protest was peaceful.

Three clear ‘At Large’ choices for PNP, two still to be ratified