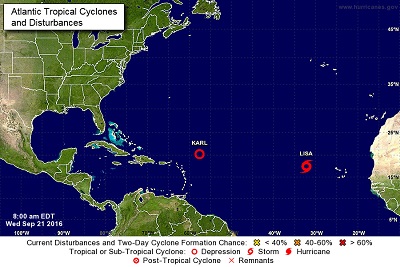 KARL is losing the battle against the hostile environment prevailing in the Tropical Atlantic…  At 5 a.m EDT, the center of Tropical Depression Karl was located near latitude 20.2 degrees North and longitude 57.6 degrees West or about 350 miles North-East of the Leeward Islands or about 945 miles South South-East of Bermuda

KARL is moving toward the West at 14 mph, but a West-North East to North-West motion at a slightly faster forward speed is expected through Thursday.  Maximum sustained winds have decreased to near 35 mph with higher gusts.  Additional weakening is possible today, but some restrengthening is forecast to occur n a day or two.

LISA is a little stronger…..At 5 a.m EDT, the center of Tropical Storm Lisa was located near latitude 17.5 North and longitude 32.2 West or about 550 miles West-North-West of the Cabo Verde islands. Lisa is moving toward the North-West at 9 mph, and this general motion is expected to continue over the next 48 hours.

Maximum sustained winds have increased to near 50 mph with higher gusts.  Some additional strengthening is possible today, but steady weakening is expected to begin by Thursday.

The next news item will be issued at noon.