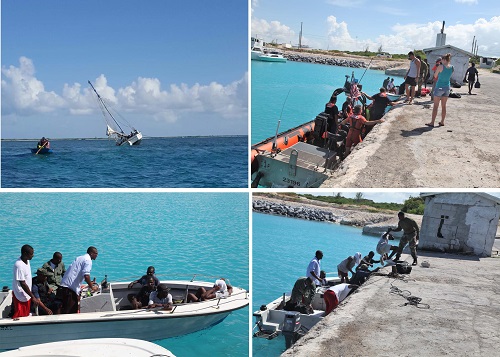 HMBS Coral Harbour (RBDF), Bahamas, September 23, 2016 – During the early hours of this morning, officials stationed in Matthew Town, Inagua received a frightened call from a crew member of a Haitian sailing sloop reporting that their vessel, the Change Vie had run aground.  Efforts were made to locate their exact position and a rescue mission was launched.  The rescue mission emphasized the close working relationship that has been forged by the local uniformed branches, Inaguan residents and the US Coast Guard assigned to that area.

In a joint effort, members from the Royal Bahamas Defence Force, Immigration, Royal Bahamas Police Force, Customs, US Coast Guard, DEA, DEU and OPBAT personnel, along with local fisherman pooled their available resources, in a complementary manner and rescued the nine men on board who were attempting to reach Inagua to undergo routine processing.

Though it proved difficult at times, as the sailing sloop was lodged very decisively onto a reef around Mollasses Point, they were brought safely to Matthew Town Basin.  They all appeared to be in good health and shared that they had ran aground during the wee hours of the morning and did not realize how stuck they were until break of dawn.  They were happy to be on land again after the ordeal, even though they lost many valuables during the incident.

The men, whose documents were all found to be in order, are now in the care of Immigration officials in Matthew Town, Inagua as they remain thankful for life.

Related Items:9 men happy to be rescued and alive after their boat ran up on a reef, 9 men rescued at sea, distress call goes out after a boat gets stuck off of inagua, rbdf along with the u.s coast guard and others pull together to rescue 9 men at sea